6 Verses About Honey in the Bible

Looking for honey in the bible?

The word, honey, is mentioned 61 times there (New International Version). If the bible is God's inspired Word, honey must be good!


Pleasant words are as an honeycomb, sweet to the soul, and health to the bones. Proverbs 16:24

1. The Promised Land to the Israelites was described as a land flowing with milk and honey in the bible, a sign of the abundance, ease, and prosperity to be found there.

"Then He said, "I Am The God of your father, the God of Abraham, the God of Isaac and the God of Jacob." At this, Moses hid his face, because he was afraid to look at God. The Lord said, "I have indeed seen the misery of my people in Egypt. I have heard them crying out because of their slave drivers, and I am concerned about their suffering. So I have come down to rescue them from the hand of the Egyptians and to bring them up out of that land into a good and spacious land, a land flowing with milk and honey - the home of the Canaanites, Hittites, Amorites, Perizzites, Hivites and Jebusites." (Exodus 3:6-8) 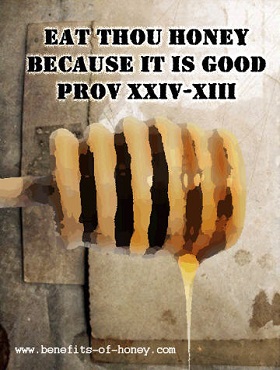 2. Honey in the bible was a symbol of good health for Samuel.

"Now the men of Israel were in distress that day, because Saul had bound the people under an oath, saying, "Cursed be any man who eats food before evening comes, before I have avenged myself on my enemies!" So none of the troops tasted food. The entire army entered the woods, and there was honey on the ground. When they went into the woods, they saw the honey oozing out, yet no one put his hand to his mouth, because they feared the oath. But Jonathan had not heard that his father had bound the people with the oath, so he reached out the end of the staff that was in his hand and dipped it into the honeycomb. He raised his hand to his mouth, and his eyes brightened." (1 Samuel 14:24-27)

3. Honey in the bible was also a honoured gift.

"Then their father Israel "If it must be, then do this: Put some of the best products of the land in your bags and take them down to the man as a gift - a little balm and a little honey, some spices and myrrh, some pistachio nuts and almonds." (Genesis 43:11)

4. The Book of Wisdom extols the goodness of honey.

"My son, eat honey because it is good, And the honeycomb which is sweet to your taste." (Proverbs 24:13)

5. John the Baptist survived on honey.

"In those days John The Baptist came, preaching in the Desert of Judea and saying, "Repent, for the kingdom of heaven is near." This is He who was spoken of through the prophet Isaiah: "A voice of one calling in the desert, 'Prepare the way for The Lord, make straight paths for Him.'" John's clothes were made of camel's hair, and he had a leather belt around his waist. His food was locusts and wild honey." (Matthew 3:1-4)

6. Honey in the bible's last book -- Book of Revelation.

"But in the days when the seventh angel is about to sound his trumpet, the mystery of God will be accomplished, just as He announced to His servants the prophets.". Then the voice that I had heard from heaven spoke to me once more: "Go, take the scroll that lies open in the hand of the angel who is standing on the sea and on the land." So I went to the angel and asked him to give me the little scroll. He said to me, "Take it and eat it. It will turn your stomach sour, but in your mouth it will be as sweet as honey." I took the little scroll from the angel's hand and ate it. It tasted as sweet as honey in my mouth, but when I had eaten it, my stomach turned sour. Then I was told, "You must prophesy again about many peoples, nations, languages and kings." (Revelation 10:7-11)

End of "6 Verses About Honey in the Bible". Back to Quick Honey Facts.