Is Agave Nectar Safe to Eat?

Many of us think of agave nectar or blue agave as a medicinal plant whose juice or sap has been traditionally used for thousands of years by South American natives, but of late, the agave sweetener purchased in stores has become a controversial sweetener.

Coined as ""diabetic friendly," raw", "tastes like honey", "100% natural" and sold far more expensive than table sugar or high fructose syrup, agave nectar unfortunately might just turn out to be another highly refined form of fructose that has been disguised as a natural sweetener. As businesses go in great lengths to gratify the health and natural foods communities, critics warn that agave syrup is sneaking into many foods deceptively labelled as organic or raw, including ketchup, ice-cream, chocolate, fruit juices, and health food bars. 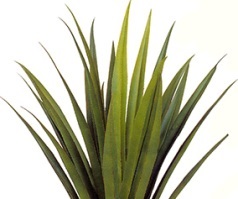 As explained by its opponents, agave syrup is not a whole food and cannot be consider as a raw food by any means. Basically, manufacturers extract the juice of the agave plant and boil it down to concentrated sugar, making it void of any nutrients that the original plant had to begin with. The main constituent of the sweetener is starch that has been processed and converted into refined fructose using a highly chemical process with genetically modified enzymes that can be dangerous and toxic for regular human consumption. Critics also point to many studies linking it to degenerative diseases and health issues. Agave syrup won't spike our blood sugar levels, but they believe that once eaten, refined fructose becomes triglycerides in the blood stream, or as stored body fat, which leads to mineral depletion, liver inflammation, and hardening of the arteries, insulin resistance leading to diabetes, cardio-vascular disease, and obesity.

For now, with all the uncertainties and a growing number of fraudulent, low-quality "agave" products on the shelves, my mind is set on not eating agave syrup.

End of "Is Agave Nectar Safe to Eat?". Back to "Use Natural Sweetener Honey for Healthy Immunity System"