Crystallization of honey is a little understood process or rather, much misunderstood phenomenon. Most of the consuming public associate crystallized honey that has become coarse and grainy in texture with table sugar and assume it is an unnatural, adulterated honey or a poor quality honey. Some even think that crystallized honey is spoiled and should be discarded.

We often hear about these concerns regarding crystallized honey:

"I received a bottle of liquid organic honey as a gift but it became crystallized after two weeks. Is the honey pure and should I continue using it?"

"When I bought a 12-oz jar of honey a week ago, the entire jar was a clear golden brown color. Just a week later, half the contents has become a cloudy, clumpy mass and the remaining amount of the golden brown liquid settled on top. What is the awful mass below the honey? Did I pay for only 6 oz of real honey?" 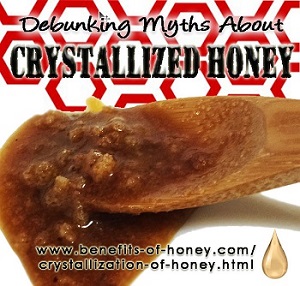 Very few consumers are able to accept honey in the crystallized state or can appreciate the ease of spreading honey in its semi-solid state without the messy drips, much less biting and chewing on the sugary, gritty grains. (See picture of granulated raw honey with propolis and pollen particles below.) And because consumers prefer honey that stays liquid for a long period of time and honey that is brilliantly clear and free of any cloudy substance, honey suppliers say they are just giving what consumers want. Yielding the healthiest honey for consumers is not their primary concern. (The entire food industry, as we all know, is basically driven by the perception of wholesomeness and not by real wholesomeness.)

The truth is crystallization of honey is a natural and uncontrolled process. Containing more than 70% sugars and less than 20% water, honey is naturally an unstable super-saturated sugar solution. Hence, over time, almost all pure raw honey crystallizes. The composition ratio of glucose and fructose in a floral nectar source determines how fast the honey crystallizes. Honey varietals with a low fructose to glucose ratio, such as floral varietals Dandelion, Aster, Clover, and Rata honey crystallize swiftly in days and weeks, while honey varietals with a high fructose to glucose ratio eg, Tupelo, Acacia, Longan, Eucalyptus, Leatherwood and Honeydew crystallize slowly and stay liquid for years.

During crystallization, glucose sugar which is naturally pure white, separates from water and becomes crystals, while fructose remains as a liquid. That is why crystallized honey thickens, becomes more viscous and sets a lighter colour than when liquid. Some honeys crystallize uniformly while others crystallize partially at the bottom of the jar and form a layer of liquid on top. See image on the right. Also, the size of the crystals formed varies from honey to honey; some varietals crystallize rapidly to form fine crystals while others, slowly to form large ones. (This is the reason why some honey varietals crystallise to form a coarse sugary texture, and some varietals crystallise to form a smooth creamy consistency.) Even though the formation of crystals has absolutely no bearing on the quality of honey, somehow most people still reject honey that is sugary and coarse in texture. For instance, because Manuka honey granulates slowly and forms large crystals, it is often creamed to a fine consistency to please the palate of consumers. 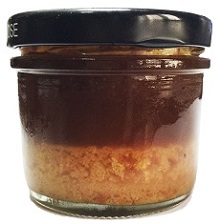 To return a bottle of crystallized honey to liquid state, simply place it over a warm water bath of about 40ºC for about 15 minutes or as soon as the granules have dissolved. Subjecting honey to too much heat would destroy its live enzymes. Store honey at room temperature in air-tight containers, refrigerating it is not recommended as it would accelerate the process of crystallization and harden the honey, making it difficult to scoop and mix with water or other foods. (See picture of refrigerated honey that has hardened like a candy on the right.)

Unfiltered raw honey contains particles such wax bits, pollen grains and propolis which act serve as nuclei for accelerating the growth of glucose crystals. Thus, most supermarkets do not carry such honey as it tends to crystallize even more quickly. Processed honey remains in liquid form on the market shelves for a much longer time as sugar crystals have been dissolved by heating (pasteurization) and any suspended particles and air bubbles that encourage crystallization are removed by filtration. 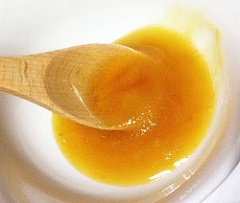 Creaming is another way for honey suppliers to save honey from turning grainy and undesirable in appearance. The honey is rapidly granulated at a low temperature, resulting in smooth and spreadable ultra-fine white crystals that can neither be seen with the naked eye nor detected on the palate. Thus, creamy, smooth-textured, pale-looking honey that you commonly find in the supermarket is actually the result of a specially controlled crystallization process. Semi-solid creamed honey however can become unstable in warm climates where room temperature can be as warm as 30 degree C or even higher. Overtime, it can become darker in color, runnier and less viscous or even return to its liquid state. (See picture of cream honey that has partially converted to liquid on the right.)

I often thought, will the problem of pasteurized, pollen-free honey disappear with consumers' acceptance of cloudy, grainy honey? Is educating consumers on real honey too insurmountable a task?

1. Do you know the differences among comb, liquid, and creamed types of honey?. Learn more in: Forms of Honey.

2. Cream or whipped honey is the most superior form of honey. Is it true? Find out in: Sticky Facts about Cream Honey

3. How do I keep honey? Learn by getting: Honey Storage Tips.

5. Do you get confused by honey labels? Learn how to read them in: Natural Honey, Pure Honey, Raw Honey ~ Making Sense of Honey Labels

7. Why you should be happy if your honey crystallizes in the fridge: The Beekeeper and Good Honey.

End of "Crystallization of Honey", back to "What's the Best Honey?"