The combination of honey and cinnamon has been used for centuries in both traditional Chinese and Ayurveda, a system of healing founded 5000 years ago in India. The two ingredients with unique healing abilities have a long history as a home remedy. Cinnamon is one of the oldest spices known to mankind and honey's popularity has continued throughout history. Cinnamon's essential oils and honey's enzyme that produces hydrogen peroxide qualify the two "anti-microbial" foods with the ability to help stop the growth of bacteria as well as fungi.

Honey and cinnamon mix is used not just as a beverage flavoring and medicine, but also as an embalming agent and are used as alternatives to traditional food preservatives due to their effective antimicrobial properties. 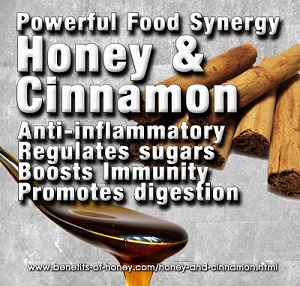 Also, it is worth mentioning that in Ayurvedic medicine, honey is known as 'Yogavahi', which means "the carrier of the healing values of the herbs to the cells and tissues". It is believed that when combined with another substance (eg a herb or spice) in a formulation, the special quality of honey enhances the medicinal qualities of that formulation and helps them reach the deeper tissues in the body more effectively. And honey and cinnamon, which is one of the best-known mixtures, has been reported to be a natural cure for many diseases and a formula for many health benefits:

1) Prevent HEART DISEASES: Apply honey and cinnamon powder on bread instead of using jam or butter and eat it regularly for breakfast. It is believed that in the long run, this honey and cinnamon recipe can help prevent blockages in blood vessels, heart attacks and hypercholesterolemia.

2) Relieve ARTHRITIS pain: Apply a paste made of the two ingredients on the affected part of the body and massage slowly. Drinking tea with honey and cinnamon daily can also help relieve pain and stiffness in the joints.

3) Prevent HAIR LOSS: Apply a paste of hot olive oil, a tablespoon of honey, a teaspoon of cinnamon powder before bath, leave it for 15 min and wash.

4) Cure BLADDER INFECTIONS: Mix a teaspoon of cinnamon powder and half a teaspoon of honey in a glass of lukewarm water and drink. This honey and cinnamon drink recipe can help destroy the bacteria in the urinary system.

5) Relieve TOOTHACHE: Apply a paste of cinnamon powder and honey on the aching tooth.

7) Relieve COLD: Make a glass of lukewarm honey water mixed with a pinch of cinnamon powder to help boost your immune system during the cold season. It is also helpful in clearing the sinuses.

9) Promote LONGEVITY: Regularly take cinnamon and honey tea to strengthen your immune system and protect your body from viral and bacterial attacks. Simply add honey and sprinkle a little cinnamon powder to your favourite tea. 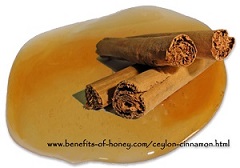 10) Prevent ACNE: A clinical study has shown that the combination of cinnamon bark extract and honey (i.e. honey and cinnamon mask) has potential activity against acne-causing bacteria (Scientia Pharmaceutica, 2017 Apr, 85(2)). Mix honey with cinnamon powder to make a paste and apply it on the acne and blackheads before sleeping and wash away the next morning.

11) Promote WEIGHT LOSS: For honey and cinnamon weight loss results, daily drink a mixture of a teaspoon of honey with half a teaspoon of cinnamon powder boiled in water with an empty stomach in the morning about half an hour before breakfast. Step-by-step instructions in: Cinnamon and Honey Recipe.

Cinnamon has an insulin boosting property (water soluble compounds called polyphenol type A polymers) which have the ability to boost insulin activity about 20 fold and can benefit people who have high sugar levels (obese people, pre-diabetics ((Journal of Diabetes Science and Technology, 2010 May; 4(3): 685–693) and diabetics). Also, read the honey hibernation diet theory to find out how honey contributes to the metabolizing of undesirable cholesterol and fatty acid, provides a fuelling mechanism for the body, keep blood sugar levels balanced, and let our recovery hormones get on with burning body fat stores.

12) Cure BAD BREATH: Gargle with honey and cinnamon powder mixed in warm water so that breath stays fresh throughout the day.

The honey and cinnamon mixture besides being a amazing potential cure for so many illnesses, its fragrant, sweet and warm taste is also a perfect match for the palate. The combination adds a magic effect to the taste of cakes, breads, biscuits and rolls and is known to make many winning recipes in the world of delicious food, such as the famous, easy-to-make, kids' favourite classic - honey and cinnamon butter toast!

This honey and cinnamon drink speeds up body metabolism. Best to take it first thing in the morning. (Avoid taking cinnamon before bedtime as some have complained about restless sleep.) More in: Cinnamon and Honey Recipe.

Are You Eating the Real Cinnamon?

If you don't know what real or fake cinnamon sticks are or are concerned about any honey and cinnamon side effects, read more in: Ceylon Cinnamon Versus Cassia Cinnamon.

End of "Top 12 Honey and Cinnamon Benefits and Uses". Back to Health Benefits of Honey