5 Most Sought-After Remedies of Cinnamon and Honey (Recipe Included)

The cinnamon and honey combination is popularly used for:

1) Cleanses colon and flushes toxins from the body.

1. Dissolve a teaspoon of cinnamon powder (or ground cinnamon) in a cup of boiling water.

2. Stir and cover to let the cinnamon steep for 20 to 30 minutes. (Shorten the waiting time if you prefer a thinner drink.)

3. Filter away any big particles and add a teaspoon of honey. (The cinnamon residue can also be consumed, but removing it helps to make a much more palatable cleansing drink. Downing a cup of spicy, chalky suspension with an empty stomach first thing in the morning is not an easy feat for all. But if you don't mind drinking with the residue at all, reduce the amount of ground cinnamon and use just half a teaspoon of it.)

4. Take it in the morning with an empty stomach about half an hour before breakfast. Repeat for a few weeks to see results.

1. Honey is added only about half an hour after mixing the cinnamon and boiling water. Step 2 allows the drink to cool down to a certain extent before adding honey. Hot water destroys the live enzymes in the honey. For more tips on how to handle and store honey, read "Honey Storage Tips".

2. For those who need to cut down the preparation time due to the morning rush, you can prepare the mixture in advance the night before. Mix the cinnamon with lesser amount of boiling water and leave it in the fridge. Next morning, strain off the particles and warm up the drink by adding some warm water and honey.

3. Many people who have tried this concoction found it to be effective in boosting their body metabolism and helpful in their weight loss efforts. I have tried it for general detox purposes and have found it to be especially helpful in moving my bowel. However, many are hesitant to try this concoction due to the intimidating prospect of a spicy mixture direct. From the various feedback posts on this mixture, I gathered there are two extreme reactions to its taste - "love it" or "hate it". And what do I personally say about the taste? If you are using Cassia/Chinese cinnamon, it's pungent, spicy, and woody. The honey in it definitely makes it much more palatable. (Note: In Ayurvedic medicine, it is believed that honey enhances the medicinal effectiveness of the cinnmaon formulation.) 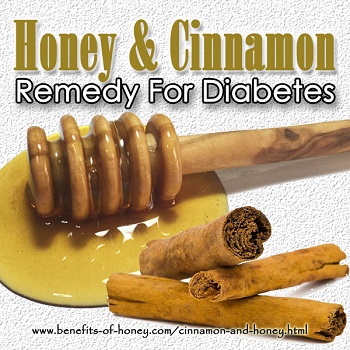 I recommend you check out Ceylon cinnamon, which is also known as the real cinnamon. It is much milder and more pleasant in aroma and highly contrasted with Cassia cinnamon in taste. Also, it doesn't seem to produce an offensive blob of slime that you see when mixing Cassia cinnamon with hot water. Its exorbitant price and lack of accessibilty is however a big deterrent for many consumers. For a more detailed comparison of the two types of cinnamon, go to: Ceylon Cinnamon Versus Cassia Cinnamon .

It is perfectly fine to sprinkle a pinch of cinnamon on to your child's toast or oatmeal. But taking cinnamon as a regimen in teaspoons may not be safe for young children. Honey itself is safe for children above 18 months, but there are differing opinions on how safe cinnamon (especially Cassia Cinnamon) is for children. Thus we would err on the side of caution and recommend this honey cinnamon recipe only for adults.

1. To read more about the benefits of the cinnamon and honey combination in Cinnamon and Honey Remedy.

2. Find out how the concoction has effectively worked for others in Postings on Honey and Cinnamon Cure.

End of " Most Sought-After Remedies of Cinnamon and Honey (Recipe Included)" Back to "Honey and Cinnamon Remedy".