Warning on Honey and Infant

You probably also have heard people warn about honey and infant while learning all the possible health benefits of honey.

Honey should not be given to infants under the age of 18 months (to be on the safer side, though some doctors would say 12 months). This is because some honey contains low count of naturally occurring bacterial botulinum spores, which bees collect together with the nectar. These spores cannot be removed during honey processing and cannot be detected by consumers.

A baby's immature digestive system is not yet acidic enough to inhibit the toxin from being produced, whereas the digestive system of an older baby and adults is. Hence, there is a potential for these organism to thrive and grow in the intestines of young infant's intestines and produce toxin, possibly causing a serious form of food poisoning known as infant botulism. The typical symptoms of this illness are constipation followed by general weakness and poor feeding ability, and in worst cases, they can lead to sudden death. One aspect that parents tend to forget is that are also processed foods with honey added as an ingredient, such as crackers, cereals, bread, etc. Infants should also be kept safe from these foods. 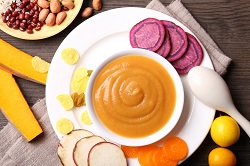 And how about a pregnant mom or a nursing mom? Can she safely eat honey?

Yes, it is safe. The digestive tract of adults is able to fend off the botulism spores, render them harmless, and prevent them from growing. Since the spores would be killed in the gastrointestinal tract, no toxin will be produced to endanger the foetus of the pregnant mother. Similarly, for nursing mothers, these spores would not make it into your bloodstream and therefore cannot be present in their milk.

In fact milk with honey is good and safe for pregnant women who are desperate to get a good night's sleep. Carbonated drinks, coffee and other caffeinated drinks should be restricted from their diet as much as possible.

For more information on honey remedies for pregnancy woes such as heartburns, colds and morning sickness, you might want to read Woes in Pregnancy and Honey Remedies.

End of "Warning on Honey and Infant". Go back to "More Honey Information From FAQs".