The Honey Diet book by Mike McInnes was published early this year (2014), following his precursors, The Hibernation Diet in 2007 and The Honey Revolution in 2009.

McInnes's key message in this book remains the same - 1 tablespoon of honey before bedtime can restore our immune system and even help you lose weight.

But what particularly stood out was the expounding on how sugars are managed by our body and why our brain (and not our stomach) is deemed as the greediest organ, even when we are sleeping.

I just wolfed down two burgers, why am I hungry again?

The author, who has a background in pharmacy and sports nutrition, explains how our appetite and thus how much we eat is controlled by the brain. For instance, normally, when we skip a meal or two, our blood glucose level drops. Our brain which requires a steady feed of glucose as fuel detects this deficiency and triggers the appetite hormones. As a result we feel the need to eat. On the other hand, when we consume an excessive amount of high-sugar foods such as bread, noodles, rice, chips and sweets, excess glucose floods our body. The brain switches to a crisis mode to protect itself from a dangerous oversupply of fuel to the neurons.

When the fuel supply is suppressed, the brain becomes hungry quickly and its starved neurons trigger the release of appetite hormones to signal us to eat more. As the brain's fuel feeding mechanism remains malfunction, each episode of eating will send us deceptive hunger pangs, creating a continuous cycle of uncontrolled binging. As the McInnes puts it, "hunger is driven by the brain seeking new sources of energy and not by a grumbling stomach looking for more food." And if you have ever wondered why people who are overweight seem to be perpetually hungry, here you have the answer to why they have constant cravings for food. Their brain fuel feeding mechanism basically has shut down and their bodies are no longer responding to insulin normally. So, the next time, if you ever feel hungry just after a big meal, it is not that your digestive system has become exceptionally superb but the brain is actually giving you false signals that you need to eat.

Feed the brain with honey first and sleep away the fats!

The World Health Organization's latest data (2014) shows that more than 1.4 billion people are obese based on Body Mass Index standards and this number is double that in 1980. Many neuroscientists are studying how to combat obesity and find ways to tickle the brain to trim the fat. Recently, a brain scientist just told the local papers here about her big idea to use a computer game to steer players from overeating and sloth. And that immediately connected me to McInnes's proposition that one can just eat honey and lose weight. There is probably no simpler dieting method than this!

We are often warned that sugar is sugar, no matter what type, and all sugars, including honey, are bad. But according the McInnes, science has shown otherwise - honey is a good sugar. Honey is deemed to be the "gold standard food" for fuelling the brain during restorative sleep. Honey is liver-specific and is the most preferred food for replenishing the liver. No other fruit or sugar is known to be a better fuel than honey. Honey doesn't have the same digestive burden like apples or bananas and is metabolized optimally in the liver and differently from other sugars because of its hosts of nutrients and bioflavonoids. One or two tablespoons of honey before bedtime are directed straight to replenish the liver's glycogen reserves for fuelling the brain during sleep. As pointed out by McInnes, our body can burn more fat when sleeping than exercising and it is possible to burn around 65g of body fat during the night, which is seven times the fat-burning potential of a 90-minute workout! The caveat is, our brain cannot be allowed to get hungry during our sleep, if it starts to feel hungry, the stress hormones will be activated immediately and halt any repair and recovery process so that fat- burning won't happen. Many research studies have also pointed to the strong link between sleep deprivation and obesity. 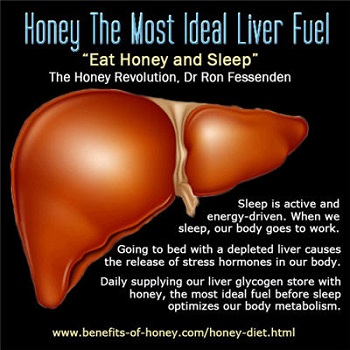 An article by Timesleader.com also points to the strong link between sleep deprivation and obesity with findings from a University of Chicago study, which showed that people who slept well lost more fat when dieting, while sleep deprived participants lost more muscle. The article also discusses a research that found that "those who slept five hours per night were 73 percent more likely to become obese than those who spent nine hours with their favorite pillow". In addition, it also notes that "when you're sleep deprived, your body almost immediately develops conditions that resemble diabetes" and that "a study of people in their late 20s and early 30s who slept fewer than six and a half hours per night showed they essentially had the insulin sensitivity of someone over 60."

So, replenish your liver with a tablespoon of honey just before going to bed and this will see the brain through the nocturnal fast. For a more details, refer to The Hibernation Diet.

Sleeping pills, as pointed out by McInnes, are unable to stock the brain's energy reserve and induce a peaceful restorative sleep like honey does. Honey provides the small glucose spike which stimulates the release of insulin, which in turn is needed for the body to trigger the release of the sleepy hormone, melatonin. It is a more effective cure for insomnia and has no side-effects. As a potent anti-stress food, honey ensures a steady supply of energy to the brain and prevents the brain from triggering stress reactions. In the long run, taking honey before bedtime can improve our memory and concentration capacity and protect us against the damages of mental aging and degenerative diseases such as Alzheimer's disease, dementia, and Parkinson's disease.

To your good health,
Ruth Tan

End of "Which Honey is the Best?". Back to "Frequently Asked Information About Honey".