3 Reasons Why Honey Should Not Be Banned in Diabetic Diet

The diabetic diet is strictly controlled in terms of sugar and mineral compounds intake. Hence it's not surprising that "whether honey is allowed for diabetic patients" is a frequently asked question for Benefits of Honey.

Diabetes is a deficiency of the pancreas, whereby insulin is not produced sufficiently or utilised properly. It's basically a disorder of metabolism, primarily that of carbohydrates. The ingested sugars and starches cannot be deployed, and hence are eliminated in the urine.

Symptoms of diabetes include frequent urination, extreme thirst or hunger, weight loss, fatigue, numbness, and infections. There are 2 types of diabetes. In type 1 diabetes, the body doesn't produce any insulin, whereas, people with type 2 diabetes either don't produce enough insulin or their cells resist the insulin, and they tend to be overweight, because the high insulin levels, unable to channel glucose into muscle cells, convert glucose into fat and cholesterol instead. This results not only in obesity, but also very often heart disease, poor blood circulation in the legs and eye diseases. While type 1 diabetes is treated with insulin injections, which help glucose get into the body cells and maintain blood glucose control, type 2 diabetics commonly use glucose-lowering drugs. Most diabetics are type 2 and are usually in their 40s. 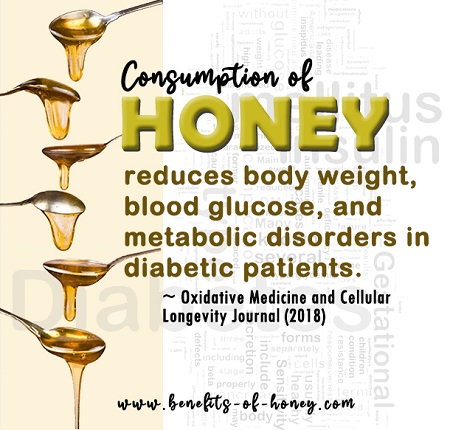 1. Not All Sweeteners are Made Equal

You get (99 per cent of the time) a "no-no" answer when you ask doctors if honey is allowed for diabetics. With appropriate control, many diabetics and pre-diabetes (people with blood glucose levels higher than normal person but not high enough to be considered diabetic) are still able to safely enjoy natural honey (Journal of Medicinal Food, September 2007, 10(3): 473-478). Before incorporating honey into their meal planning, find out how much of the sweet liquid can be consumed on a daily basis. Each diabetic is different and should learn how his or her body reacts to different foods containing carbohydrates. Bear in mind that the total amount of starches or carbohydrates in a food is the key consideration, not the amount of sugar. Honey is a carb food as well, just like rice, potatoes, thus just keep in mind that 1 tablespoon of honey has approximately 17 grams of carbohydrate, and taking that into account when counting your total daily intake of carbohydrates, diabetics can work it out just like any other sweetener or carbohydrates. To monitor response to honey, blood sugar levels could be noted before consumption and again two hours later. Also, when purchasing commercial honey for diabetic patients, be sure that it is pure and not adulterated by glucose, starch, cane sugar, and even malt, which is to better to be avoided in a diabetic diet.

2. Honey is Gentle on Blood Sugar

This is not surprising as the idea of eating honey to regulate blood glucose seems rather counter intuitive. But did they ever tell you that clinical studies have shown that pure honey is a healthier choice in diabetic diet than table sugar and any other non-nutritive sweeteners such as Splenda, saccharin, aspartame?

Honey requires lower levels of insulin compared to regular white sugar and does not raise blood sugar levels as rapidly as table sugar, that is, it has a lower Glycemic Index than sugar. Though honey contains a significant amount of sugar, it consists largely of two simple individual units of sugar - glucose and fructose, which are absorbed at different rates into the body (Complementary Therapies in Clinical Practice, 2013 Feb;19(1):15-9). In fact, Dr Ron Fessenden reveals in his book, The Honey Revolution that "the more glucose intolerant one is, the lower the blood sugar response after honey ingestion versus the higher the blood sugar response after consuming sucrose or glucose". The book further explains why honey is able to perform this remarkable regulatory role. The perfect one-to-one ratio of fructose and glucose found in honey facilitates glucose intake to the liver, hence preventing an overload of glucose entering the blood circulation. And nature's honey is the only sugar that possesses this special ability. 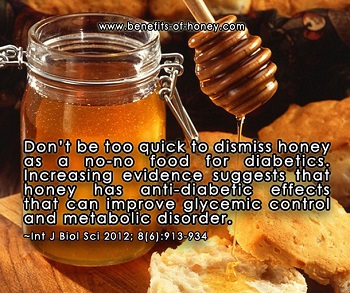 Next, the use of monosaccharide fructose is often recommended to sweeten the diet of diabetics due to its significantly lower GI. The trouble is, fructose is absorbed differently than other sugars. It is not utilized for energy like glucose, but stored in the liver as triglycerides. This presents a great metabolism burden on the liver and can eventually lead to major health issues related to obesity and further health damages for diabetics. Sadly, in their quest to avoid sugar in foods, many diabetics miss the point when they start to plan their diet around "fructose fruit sugar", "diabetic birthday cake", "NutraSweet ice-cream", "sugar-free candies", etc, which all contain corn syrup or artificial sweeteners that can be potentially even more harmful than regular sugar when consumed in the long term.

A clinical research that studied the effect of honey consumption on glycemic control of 53 patients with type 2 diabetes showed that "the waist circumference of the patients was decreased" after 8 weeks of consuming 50g of honey daily (Int J Prev Med 2019;10:3). These findings seem to be contrary to what most people believe - honey is bad for those who are trying to lose weight. So, honey should not be banned in diabetic diet so impetuously as it can be a suitable sweetener for type 2 diabetes patients. 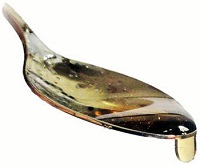 1) A combination of honey and cinnamon that has been used for centuries in both traditional Chinese and Ayurveda for diabetes: Cinnamon and Honey Recipe.

2) Honey as a best sugar for diabetes? John, a diabetic found better health and more energy with the use of honey. Get his story here: Honey - More Than a Good Sugar.

3) Corn syrup is made from corn...and is fine in moderation? This is what the Corn Refiners Association in United States is disseminating and propagating on national TV - that HFCS is natural and safe for your health. Lies and treacheries.

4) Sugar Substitute: What's behind the name? Manufacturers are promising better and healthier forms of sugar substitute. We can rattle off many different types and names of sugars, but do you know what they are made of? How many of these sweeteners are really beneficial to our body?

5) Ironic it may seem, so-called "fruit sugar", which is hailed as a healthier sweetener those who have low sugar tolerance, can actually be dangerous for diabetics. Read: Fructose Corn Syrup or Fruit Sugar?

End of "3 Reasons Why Honey Should Not Be Banned in Diabetic Diet" Back to "Honey Nutrition Facts".