So, what exactly is cholesterol? It is a type of lipid or fat produced by the liver needed to make vitamin D and some hormones, build cell walls, and create bile salts that help you digest fat. Our liver produces enough of this waxy substance (about 1,000 milligrams a day), so we don't have to worry if there is need to get supplements.

In fact, many foods contain cholesterol and sometimes it's hard to ensure that we don't get an excessive intake of cholesterol that could lead to serious health problems. Eggs, meats, and whole-fat dairy products (including milk, cheese, and ice cream) are loaded with cholesterol, whereas vegetables, fruits, and grains contain none. Because cholesterol can't travel alone through the bloodstream, it has to combine with certain proteins, which pick up the cholesterol and transport it to different parts of the body. When the cholesterol and protein are combined, a lipoprotein is formed. 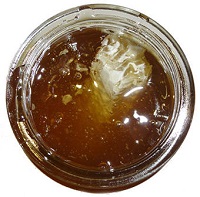 Most cholesterol is LDL/bad (low-density lipoproteins) cholesterol which can narrow the arteries and clog the blood vessels that supply the vital organs such as the heart, brain, kidneys and intestines. This is why it's so important to start paying attention to our cholesterol levels by maintaining a healthy weight, keeping an exercise regimen to strengthen your heart, avoiding foods that are high in saturated fat and trans fat and following a low fat diet that contains many low-cholesterol foods such as fruits, veggies, whole grains (like breads and cereals), legumes (beans), and fish. When you eat more of these carbohydrate-rich foods, you will eat less of the foods higher in fat and cholesterol. 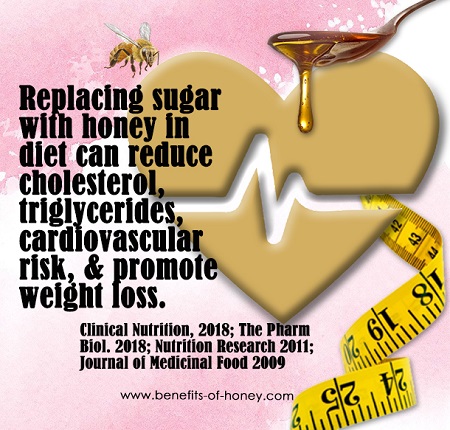 Not only is honey free of cholesterol, it has been reported that adding small amounts of it in the daily diet could even help keep cholesterol levels in check. High in minerals such as potassium, calcium and sodium and B complex vitamins, honey is known to be a cholesterol fighter - honey lowers cholesterol in our blood. The antioxidants in honey prevent cholesterol from being moved out of the blood and into the lining of the blood vessels. Daily consumption of this natural sweetener could raise blood levels of protective antioxidant compounds in the body.

It is believed that honey contain about the same range of antioxidants as green vegetables, such as broccoli and spinach and also comparable to fruits such as apples, bananas, oranges and strawberries. And the antioxidant level in mead , a wine made with honey is believed to be comparable to white wine in terms of its antioxidant capability. Generally, it's been known that dark honey, such as Buckwheat honey ontains the high levels of antioxidants and thus lowers cholesterol more effectively than lighter honey.

The intake of the honey and cinnamon mixture also has been reported to have innate healing characteristics that appear to help diabetics control both blood sugar and cholesterol levels.

So, see if honey lowers cholesterol by kick starting your day with this honey and lemon cleansing tonic: mix a spoonful or two of honey and the juice of half a lemon into a cup of warm water and drink each morning before breakfast. Incorporate honey in more places where you might be using table sugar, and use it often as a home remedy, in no time, you may find a significant increase in the amount of antioxidant chemical compounds in your body.

End of "How Honey Lowers Cholesterol" . Go Back to Honey Nutrition.