Care for some dark honey?

Not everyone can say "Honey, I love you!" For some people (I suppose they are a minority), honey isn't something that would delight their taste buds. In fact, I have people telling me they find honey a huge turn off. Stickiness is often not the reason quoted for rejecting honey. They actually feel that the taste of honey is off-putting. I tend to believe that they must have eaten a honey with an intense flavor that only a special taste that is acquired over time can appreciate. Unfortunately, many a times such a negative experience stays and lets the person assume that all honey has the same bad taste.

While it may not be true 100% of the time, dark honey tends to have a more intense flavor. Thus, even though Tasmania Leatherwood, a relatively dark color, heavy scented honey, has a huge loyal fan base, some people find it too perfumed and overpowering to be acceptable as a sweetener. 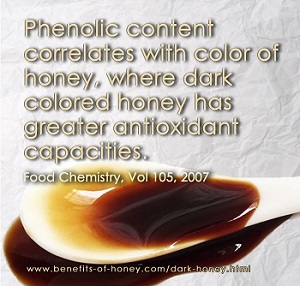 Similarly, dark color Manuka honey possesses an unusually wild, woody aroma that is often not immediately admired by first-timers. (Note: Manuka honey is usually creamed and thus appears lighter in color. The original color of Manuka honey is much darker.) In fact, it was said that before its medicinal value was discovered and successfully marketed, the taste of Manuka was so unappreciated that it was added to cattle feed. The taste of darker honeys such as Goldenrod, Bamboo, Buckwheat, Thyme also have often been described as too "funky", "twangy" and "pungent". In extremely negative cases, some varietals of these honeys have even been labelled as "smelly socks", "fish tank", "rotten eggs", and "farm feed".

Dark bold honey may not always be appealing to everyone in terms of taste. But health wise, it could be a more popular choice than light color honeys. It is not yet entirely clear which components of honey determine the antioxidant capacity of honey. The combined activity of phenolics, peptides, organic acids, and enzymes appears to be responsible for its antioxidant activity; however these compounds are not the only contributors (Journal of Agricultural and Food Chemistry, 2002).

The color of honey varies according to their botanical origin and the weather of the place where the plants grow. In general, dark honeys have higher mineral contents (e.g. potassium, manganese, iron, sodium, etc.) than lighter ones (Czech Journal Food Science, 2015; Journal of Saudi Chemical Society, Vol 18, 2014). Also, the darker the honey color, the higher the phenolic and flavonoid contents and the antioxidant levels, which are critical in counteracting free radicals responsible for triggering the aging process and diseases such as cancer, hypertension and high blood cholesterol and diabetes (General Medicine, 2014; Food Chem. 2007). Full-bodied honeys such as Blackbutt, Jarrah, Manuka, Thyme, Dandelion, Leatherwood, Meadow, Heather, Chestnut, Honeydew, and Buckwheat happen to have darker color. (However, note that many of these dark honeys are often sold in the creamed form and hence appear as much lighter in color compared to the liquid form. More on effects of creaming honey in: Sticky Facts about Cream Honey). Well-known for their strong medicinal properties, these honeys are highly prized and sought after as natural alternative remedies for synthetic drugs in treating a myriad of health conditions and ailments such as cough, flu, infections, skin problems, and poor immunity. For instance, the famously healing Manuka honey with UMF certified labels can command a price ten times more than regular honey.

So the next time someone offers you some dark honey, don't be too quick to judge its taste. Gladly accept it and eat it even if you are not too agreeable with the taste. It is likely to contain some really healthful stuff in it! 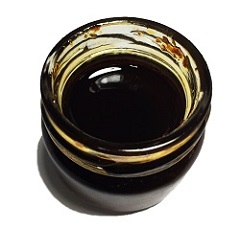 1. If you are located in Singapore, check out the dark, rich and aromatic honey by Bee Healthy.

2. Honey is being reinstated as an antibiotic for treating cuts, burns, insect bites, eczema and psoriasis, and fungal infections. More in: Honey the Tastiest Antibiotic.

3. Why this honey commands a much higher price and for what ailments and health issues people are using it: The Miraculous Manuka Honey.