Olive oil is extracted by pressing olives and has many varieties, depending on the amount of processing involved:

• Extra virgin - considered the best; this oil comes from the first pressing of the olives

• Virgin - comes from the second pressing

• Pure - undergoes some processing, such as filtering and refining 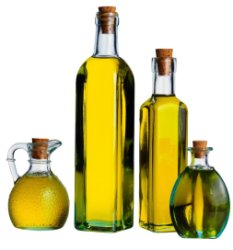 Consisting of 75% monounsaturated fat and only 13% saturated fat, olive oil is much healthier than other fats such as butter, high-fat meat. Thus it's no surprise that the Mediterranean diet which, which uses the oil of olives as the main dietary fat, increases fish, vegetable and bean intake, and limits meat and dairy foods, is linked to good health and reduced risk of cardiovascular disease and diabetes.

Monounsaturated oils are believed to cause less production of the bile acids in the digestive tract that promote colon cancer. Being more stable than polyunsaturated fats, they are less likely to generate the free radicals that create harmful blood cholesterol (low-density lipoprotein, or "LDL"). LDL damages blood vessels and can create changes in genes that may lead to cancer. 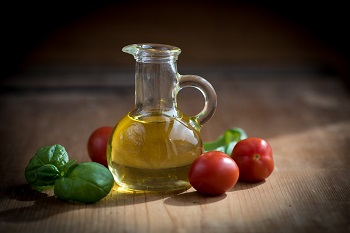 Scientists found that many health benefits of this special oil are derived from more than 30 plant compounds which have antioxidant and anti-inflammatory effects and can promote heart health and protect against cancer. However, we need to remember not to cook this oil. Heating causes enzymes to be destroyed, fats to become carcinogenic (which means cancer-causing), carbohydrates (sugars) to become caramelized, and vitamins and minerals to diminish.

If we were to personify the foods we eat, honey and olive oil surely would be best of friends. I could think of at least two reasons for this:

1) The two liquids are commonly found together in many recipes of vegetables salads, bread, grills and marinates, etc. Both are best eaten raw for its natural goodness and taste. When the two are drizzled and combined in a sweet dish like salad, they complement each other perfectly and render a lovely sunshine taste in the food that they are combined with.

2) When we start to count the benefits of this special fat, the amount of criticism triggered off sometimes could be as much as when we extol the goodness of honey. The protest from some people is somewhat similar for the two foods; though honey comes from bee, it's still just a fancy name for sugar, and sugar is terrible; and oil from the fruit olive no matter what is still fat, and fat is bad for our body. My response to these remarks: both honey and olive oils are healthier food alternatives. While there is good sugar and bad sugar, and similarly, while there's bad fat, there's also good fat. And eating good sugar and good fat can be beneficial to our body.

As usual, I want to say this again, find pleasure in tasting all foods, but eat with prudence and in moderation.

End of "Olive Oil, a Healthier Choice of Fat". Back to "Why Health Food Matters and Makes a Difference".