Honey is an Aphrodisiac

Did you know that honey is aphrodisiac and boosting your libido may be as simple as adding honey to your diet?

It's been known that a simple food like honey has beneficial effects on sexual health. It promotes testosterone production in men and the mineral boron present in honey aids the use of estrogen in women.

In addition, a scientific study found that a three-ounce dose of honey significantly increased the level of nitric oxide, the chemical released in the blood during arousal. These findings are not surprising as from time to time, Benefits of Honey would receive unsolicited mails that point us to honey as a potent home remedy and tonic for erectile dysfunction sufferers. Many of them attested to honey's effectiveness in improving overall energy level, blood circulation, and stamina. 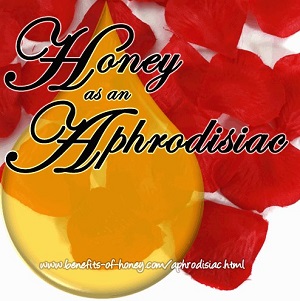 The use of honey as an aphrodisiac today can be traced back to many cultures and traditions whereby the sweet sticky liquid is popularly shared between lovers as a sensual food. It is often associated with blissful times, romance, union in marriages, and honeymoon.

In Indian weddings for instance, the bride offers honey to the groom as a symbol of sweetness in life. According to ancient Viking tradition, honey is a fertility booster. Daily, the newlyweds would drink a cup of honeyed wine, called mead in their first month of marriage. Particularly in Eastern European traditions, the making and gifting of honeycakes was associated with rituals of courtship and romance. In ancient Chinese wedding ceremonies, a goblet of honey and a goblet of wine are tied together with a red thread, and the bride and the groom would take sips and then exchanged the goblets in their bridal chamber to symbolize their union of love. Today, the practice of honey gifting permeates through many cultures and modern wedding celebrations - small jars of honey are given away as favors.

Actually, as far back as 500BC, honey has already been known as an aphrodisiac food. It was said that Greek physician Hippocrates, one of the most outstanding figures in the history of medicine, prescribed honey for sexual vigor and advocated the taking of milk and honey to induce love and ecstasy.

Finally, it's also worth noting that Avicenna, another great ancient healer and philosopher who is known as the Father of Modern Medicine, apparently recognized the superb value of honey to the human body as he described the golden liquid as "the food of foods, the drink of drinks and the drug of drugs", and specifically advised that honey could be mixed with ginger and pepper and consumed as a sexual stimulant.

So if you are looking for an agent to awaken the senses and a libido-arousing element for sexual intimacy, there is little reason not to give honey a try.

End of "Honey is an Aphrodisiac". Back to "Honey as Home Remedy"