Did you ever know that you could find effective, drug-free asthma treatment using common, inexpensive ingredients right from your kitchen cabinets - honey and cinnamon?

People inflicted by asthma often suffer from these 5 symptoms:

This chronic illness is characterized by inflammation, swelling, and constriction of the air passage and the increased production of mucous in the passage. Often triggered by viral illnesses (eg, the common cold), pollen, foods, intense exercise or environmental conditions (e.g extreme hot and cold air, dust), asthma affects 5-10% of the global population and occurs more frequently in boys before puberty and in girls after puberty. It is not a contagious disease. Studies have also showed that those who are obese run a greater risk of developing the illness. It is believed that heredity can be a risk factor. A child would have a higher chance of having asthma if one or both parents have the condition.

Asthma control includes proper medication, avoiding stimulants, and keeping away dusty or smoky areas. The most common treatments prescribed for asthma come in the form of liquid, pills, or hand-held inhalers, such as Albuterol. Steroids are also used in order to reduce inflammation in the lungs and hence, asthma flare-ups. Exercise regimens are also often recommended to build lung capacity. 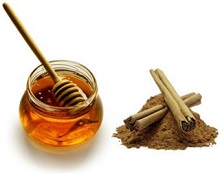 Honey and cinnamon is a well-known home remedy for treating asthmatic symptoms.

Instructions: Mix one teaspoon of honey with half teaspoon of cinnamon powder and take the concoction just before going to sleep at night and first thing in the morning.

It is not meant to be a rescue or quick-relief medication, but with repeated dosage, many have found to be an effective asthma treatment. So, if you know if anyone who is looking alternative medicine for asthma, tell them about it.

End of "Asthma Treatment Using Honey & Cinnamon". Back to "Alternative Medicine: What Your Doctors Don't Know"