An Up-Close Look at the Bees with Geoff the Beekeeper

As always, I want to know the big secrets of the tiny bees...

I recently met online quirky (... hope he doesn't mind, I mean it in a very positive way...) Geoff Kipps-Bolton, a beekeeper from San Diego. He writes in his resourceful website, bees-on-the-net, "...no matter how many books you read..., the bees will retain the right to do something different...They have an infinite capacity to make you look foolish...they don't read the same books!"

When I sent him my favourite questions about beekeeping, he so spontaneously and quickly shared his very entertaining insights (and again, I mean it very positively). 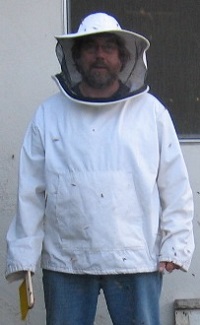 1. What makes you take up beekeeping and become a bee person?

On my way to school, when I was about 12, I used to pass a house which had a couple of hives. A friend of mine, Mark, knew the man who owned them and he used to help with them, but I never got to find out what it was all about. I suppose I was a little jealous of Mark. It just seemed a very unusual, almost esoteric thing to do.

2. Did you learn the art of beekeeping from someone?

Not really, mostly self taught, I read some books. But the bees don't read the same books. After 20 years I'm still learning.

3. How did you get your hives, did you buy them?

I used to buy them, then I bought a table saw instead. Now I make all my hives, but I buy the frames which go inside. I wouldn't want to make them for what they cost, they have to be made to quite a tight tolerance. 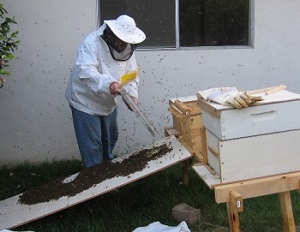 4. Most people do not react well to the sight of swarming bees, were you afraid of them when you first started out as a beekeeper? If yes, how did you overcome that fear?

I was a little afraid. In fact when bees are actually swarming they're probably at their most harmless. I had a couple of sessions watching other beekeepers else them jumped in a the deep end. Being afraid wasn't really an option. I remember the first time I collected a swarm. The people who called me were watching, asking things like, "Have you been doing this long?" I think I just said, "Not all that long."

5. Do beekeepers get stung by bees? And what's your experience so far? Is beekeeping dangerous?

Daily, I think I've been stung about 10 times today. The most dangerous part is climbing a ladder to remove a swarm high up, I'm scared of heights. (Did you read the part on my sting page about collecting a swarm). I did think next year I should put a counter on my site and update it every time I get stung. I'm sure it would be a couple of hundred times this year. It still hurts.

6. We all always use the phrase "as busy as the bee", just wondering, do bees sleep or rest at all?

I don't know if they sleep exactly, but they seem to quieten down at night. I think I read somewhere that they often aren't especially busy all the time, so the 'busy as a bee' thing is based on a falsehood. They spend quite a lot of time just 'hanging out'.

7. Do bees recognize their hive?

Yes, sort of. They aren't supposed to go into strange hives. In fact there are guard bees to stop them, but they still do sometimes.

8. Can they recognize their owner, the beekeeper (you)?

Only when I've upset them. If there are several people nearby they seem to be able to select the one who opened the hive and go after them.

9. Do bees from the same hive have different temperaments like humans? Have you encountered the more aggressive bees and the gentler ones?

Yes, definitely, and their mood changes according things like the time of year, the weather and the available forage.

10. As a beekeeper, do you become more sensitive or more in tuned to nature - the weather and environment?

I know I should but I'm not sure I actually do. Maybe I notice natural things going on more than some people do. I'll be talking to someone and stop mid sentence and say, "Oh look a Western Tanager."

11. What's the most fulfilling part of a beekeeper's job?

Collecting a swarm and putting it in the hive. I love it, and I confess I play to an audience! I have a degree in Bee S.

An Amazon DVD on backyard beekeeping that is highly recommended by our visitors to Benefits of Honey, especially for those who are figuring on their own how to get things started from scratch.

End of Interview. Back to "20 Amazing Honey Bee Facts!"