Many young children are mad about Froot Loops, the brightly coloured, sugar-laden cereal snack that turns parents naggy whenever their kids pick them up from the store shelves for obvious reasons – they are too unhealthy to be indulged in and there are far too many wiser choices of sweet treats such as fresh fruits, yoghurts, and honey sticks.

Recently, much to my disgust, I learned from the news that in a food-labelling campaign to help shoppers identify healthier food choices, Froot Loops has been given a Smart Choice checkmark! 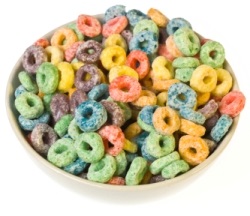 How did such a sugary snack win its endorsement as a nutritionally superior food for kids? What criteria are being used by the Smart Choice program run by food consortiums and nutrition experts? For sure you don't need to be a nutritionist to know the great amount of processed sugar in that cereal. You instantly know it when you put them in your mouth! And by just doing a little research, you'll find out that it is 41 percent processed white sugar and contains processed flour, partially-hydrogenated vegetable oil, and synthetic colouring chemicals. So, isn't this too blatant a move, especially in these days when so many kids and parents are so deeply troubled by the obesity epidemic?

What came across as the biggest ridicule is how Dr Eileen Kennedy, dean of Friedman School of Nutrition Science and Policy at Tufts University and president of the Smart Choices board tried to rationalize the recommendation of questionable choices such as Fudgsicles, Lunchables, Mayonnaise, and Froot Loops as Smart Choices. According to the New York Times,

She said the program was also influenced by research into consumer behaviour. That research showed that, while shoppers wanted more information, they did not want to hear negative messages or feel their choices were being dictated to them.

"You're rushing around, you're trying to think about healthy eating for your kids and you have a choice between a doughnut and a cereal," Dr. Kennedy said, evoking a hypothetical parent in the supermarket. "So Froot Loops is a better choice."

Since when consumers are complaining about food warnings? Choosing Froot Loops over doughnuts is considered "healthy eating for kids"? So doughnuts can also become healthy if they are compared to deep-fried Mars bar? It's hard to believe that a prominent nutrition expert would provide such an irrational, eye-popping report, but then, in the face of all the ongoing conflicts of interests between sales revenue and consumer's health benefits, it might not appear so bizarre after all.

Nevertheless, let's all be very vigilant when it comes to appraising and selecting foods from the grocery. Apparently the food industry has skewed many of its decisions when setting nutritional criteria. Shortcomings in the food can now be quickly masked by highly regarded health food labels like the Smart Choices. A lot of cereals and breads made of refined grains can easily get the seal of approval by just adding a few minerals and vitamins. As food fraud turns rampant and dishonest food marketing gurus become more dextrous in their selling tactics, I think as consumers, we should also gear ourselves up for enough information to dodge and keep ourselves shielded from all the flying darts in the shops.

Note: Please give your post some time to be published. Our system has to first monitor and weed out spammy posts. Only posts relevant to the topic will be published.

Postings on "Froot Loops Gets a Healthy Food Label?

I find this information very disturbing. Although most people that I talk to don't seem to have an interest in doing the research to learn this type of information, how sad for them. It is the same with the Tobacco industry, and I'm sure many others. It does come down to the almighty dollar. Also people need learn to use their common sense and not have so much faith that there will be a "pill" that will fix everything.

Quite frankly, they should stop putting sugar in all processed foods. We have an epidemic of having sick, overweight, pre diabetic people in America! And it gets worse, people are addicted to sugar and not the natural kind in fruit and honey but to prossesed sugar. People are becoming type 1 and type 2 diabetics from prcssesed sugar. STOP!!! the PROCESSED SUGAR!!! The big food companies don't care that sugar effects the brain like cocaine and heroine do. They just care about the ALMIGHTY DOLLAR!!! Not about ANYBODY'S HEALTH!!! Especially anybody's kids!!! KEEP TREATS, TREATS!!! They should NOT put PROFIT in FRONT of PEOPLES HEALTH and WELLBEING PERIOD!!!

We live in a very sick minded world that is controlled by to many "Need for Greed" corporations who don't give a dam who or how many people the kill or maim as long as they make big greed profits.

This information should get to as many people as possible. The world can be so deceptive

End of "How Did Froot Loops Get a Healthy Label?" Back to "Did You Know Reading Food Label Can Be So Tricky?"