More studies are pointing to honey as an effective healing agent due to the growing body of evidence of its anti-bacterial activity. And many scientific reports have suggested that honey could be an answer to the serious, growing problem of superbugs that have built up resistance to conventional antibiotic drugs due to overuse. It's the sweetest natural antibiotic you can have.

Here are the ways how honey fights infection and heals effectively.

All pure honey contains a varying level of an enzyme called glucose oxidase which is secreted and added by honeybees from its hypopharyngeal gland is able to break down glucose and slowly releases antiseptic into hydrogen peroxide when comes in contact with water. The capacity to produce hydrogen peroxidee is a key reason for honey's antibacterial activity, making it ideal for treating infected wounds and other bacterial disorders, and killing harmful bacteria without damaging body tissue. The antibacterial activity of honey however can vary considerably amongst different honeys depending on the floral varietal and the region or area where they are collected. 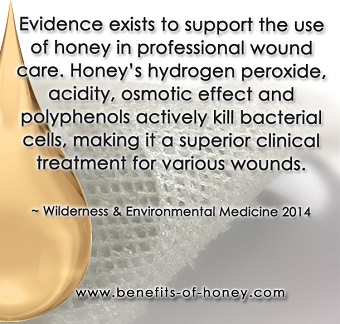 The Power of Osmosis

Due to the high sugar concentration in honey, the osmotic effect draws fluid away from the infected wound, dehydrating and killing the bacterial cells. In cases where wounds won't heal and pus starts to collect, this is when bacteria starts to feed on the injured tissue multiply and cause more damage on the tissue. The supersaturated solution of sugars in honey has too little water content to support the growth of microorganisms. Interestingly, as pointed out by Arne Simon, M. D. of the University of Bonn, The Institute of Bee Research (Celle, Germany) and the University of Waikato:

"Honey works differently from antibiotics, which attack the bacteria's cell walls, or inhibit the intracellular metabolic pathways. Honey is hygroscopic, meaning it draws moisture out of the environment and thus dehydrates the bacteria."

As honey contains polyphenols (antioxidants) which include the phenolic acids, caffeic acid, p-coumaric acid and ellagic acid, and many flavonoids, it is effective in combating infection. These antioxidants protect cells from free radicals by chemically changing them into harmless compounds like oxygen and water. Generally, darker honeys are found to possess a higher amount of phenols and thus have a higher antioxidant activity.

Honey possesses a host of healthful phytochemicals such as carotenoids or phytosterols that originate from the flower nectar of plants. The biological potency of these naturally occurring chemical elements is believed to be anti-cancer and helpful in reducing tissue inflammation, inducing the death of some tumour cells and activating white blood cells for healing. Some honeys have a stronger phytochemical antibacterial ability than others. For instance, a substantial amount of non-peroxide antibacterial properties have been identified in New Zealand's Manuka honey (Leptospermum scoparium).


End of "How Honey Fights Infection". Back to "Honey the Tastiest Antibiotic"