Honeybees have a remarkably acute sense of smell. And that's why so often, we'll find them buzzing so persistently around us at picnics with spreads of food. Their keen sense of smell guides them to the flowers and pollinates them. Foraging bees can discriminate between flowers when there are a bewildering number of flowers to select from. Their odorant receptors, which are more powerful than fruit flies or mosquitoes, also allow them to find food and communicate its location to other bees. 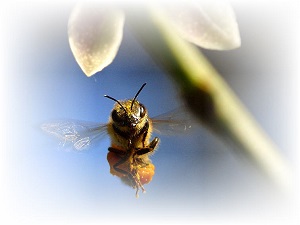 Scientists have harnessed the insect's phenomenal sense of smell to detect and track down explosives hidden by terrorists. The prototype under trial is made up of a box device containing three trained bees built into a removable drawer. A video camera records the bees' response, which can trigger off a signal upon even the faintest trace of explosives. It is said that the bees are able to "detect the scent of explosives at concentrations as low as two parts per trillion, which is the equivalent of finding a grain of sand in a swimming pool".

And the advantages of training bees over dogs to sniff out bombs? It is said that bees don't get distracted from their task easily, learn quicker, and are relatively cheaper to maintain. (Note: Making use of these bees for warfare purposes has been deemed as cruel by many people but the morality issues and controversy involved will not be discussed here.)

Now, to see the members of the Los Alamos National Laboratory Stealthy Insect Sensor Project team (2008) in action and be amazed by the incredible abilities of these tiny creatures, watch this Youtube video below:


End of "Honeybees are Ultimate Bomb Detectors!". Back to "20 Amazing Honey Bee Facts!"