Milk is Bad for You, Ladies: Swedish Study

~ Galactose, a Milk Sugar, Appears to be the Culprit

Milk is bad for ladies? But we have been raised to believe that milk is rich in calcium and helps in making strong bones and maintaining bone density, and older women should drink more milk to prevent osteoporosis. So how can it be?

Shocking findings from a research by Uppsala University and Karolinska Institute, Stockholm (2017) revealed that drinking milk might affect the bone health and even shorten the lifespan of women. The difference in the way galactose, a type of sugar in milk, is digested appears to be the reason for more bone fractures and higher mortality among women. 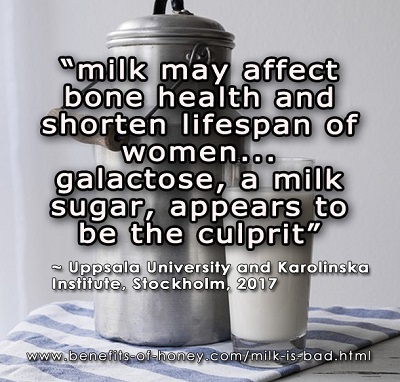 Men's risk of early death is only 30 percent higher for men who drink at least three glasses of milk per day than it is for men who rarely or never drink milk. In contrast to women, the amount of fruit and vegetables they consume did not appear to significantly alter the results.

Milk Sugar Seems to be the Reason

The study showed that those who consume a large amount of milk run the risk of an earlier death than those who don't due to increased chronic low-grade inflammation in the body. How galactose (also known as milk sugar), a monosaccharide sugar with the chemical formula C6H12O6, is broken down by the body appears to be the reason for more bone fractures and higher mortality among women. A breakdown product of lactose digestion, galactose can cause harmful oxidative stress in the body.

End of "10 Stupidest Ways to Make Your Metabolism Sluggish". Go To "6 Great Reasons Why We Need to Exercise".