Does Natural Food Coloring Bug You?

Many manufacturers are grabbing every opportunity to emphasise the presence of natural food coloring in the food they sell and quickly abandoning artificial food dyes. Why?

They have recognised the craze for natural foods and know that people are looking for healthier alternatives in their diet. A natural food coloring that is now becoming increasingly popular in yogurts, candies, jams, sausage, milk, and even cosmetics is "carmine". Now, before I tell you what "carmine" is, what does it sound like to you? Some nice herb, flower, or plant?

None of these. It's a bug, a red beetle. This is what "carmine" looks like:

Now, who is going to suspect that Red 4, Natural Red, E120, Carminic acid, or Crimson Lake are food colorings obtained from some insect! As it's hardly within the expectation of an average consumer, it does come across as manufacturers being sneaky, vague and elusive in their ingredient declaration, doesn't it? Can food authorities step out and insist on making things clearer for consumers than now? (See below the pictures of the food labels I took while I was at the groceries.) 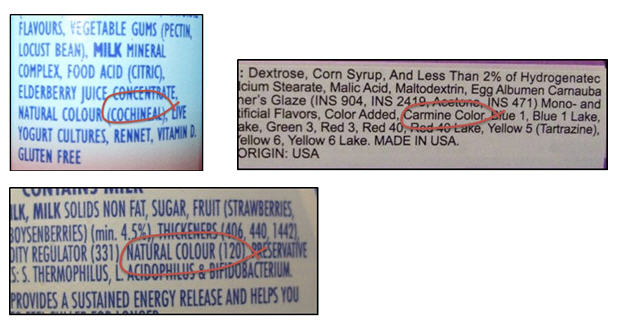 Well, in principle, I'm not going against the idea of eating food with a coloring from bug (though, yes, I do feel very uncomfortable about it). The point is, manufacturers should come clean with this natural food coloring if they want to use it. My dictionary defines "carmine" as "a crimson or purplish-red color". Consumers are going to least expect that "carmine" is actually an animal-based coloring from this living thing called cochineal. Perhaps, if it's printed as animal-based coloring, cochineal instead of "natural food coloring", whoever is cautious enough can go look up the dictionary to find out what "cochineal" is, and vegetarians can also immediately avoid it!

At the end of the day, it's fine if consumers think they are fine with eating food with carmine added, feel there's nothing unhealthy about eating bugs, are not getting any allergy reactions from ingesting carmine, and don't find eating sweets with the bug any less appetising. But at least the manufacturers should have the ingredient explained and let the consumers make the final choice and decision.

Watch this informative video on carmine.

Last warnings: Be extra careful from now on when you pick up a pack of rosy candies or fruit juice. There may be more than meets the eye in those "All Natural", "No Artificial Colorings Added" food labels.

Do you have a similar experience regarding natural coloring? Share with us! Help one another assess truth and have a chance to refuse the kinds of food they don't like or don't believe in.

Yeah these ads bug the crud out of me !! This ad is misleading and is comparable to pharma ads.

This is the most deceptive thing they do to use. It is disgusting. Thanks for enlightening us. Keep up the good work.

Do you know if juicy juice has this bug coloring in it? it says it is 100% natural juice, and when i checked the labels i didn't find any giveaways that they were using the carmine. But I could be missing something. But if I'm not then it means that not ALL natural juices have carmine?

Ruth: Hi Morgan, not all "natural juices" have carmine in it. I tend to pay more attention to pink/red colored beverages which claim to be "all natural" and yet do not seem to contain ingredients that are naturally pink/red in color. The presence of the bug coloring can be confirmed by names such as Natural Coloring 120, Red 4, Carminic acid, and Crimson Lake on the list of contents of the product.