6 Mind-Boggling Rarities and Oddities of Honey

Sharing with you all our collection of some of the most bizarre stories of honey from Benefits of Honey visitors. Enjoy!

Dramatic episodes of honey jars exploding and blowing off their lids in the car have sent many heads turning. Imagine the shock if there were passengers in the car… how messy this can be… the whole car turning sticky all over…and the cleaning that has to be done…. Well, as explained by honey experts and honey beekeepers, this could happen if there is some fermentation going on in the honey and when placed under the hot sun, the carbon dioxide released as a result of the heat could cause the pressure to build up in the jar and the jar lid to blow off.

There have been a few of these stories so far - honey instantly turning green tea into black colour (and bitter in one case). We have no explanation to this but could only guess that it must be some kind of a chemical reaction between certain substances in a specific type of green tea and specific type of honey and its pollen. No one seems to be able to suggest an answer to this odd phenomenon, but one thing we are sure, nobody dared to drink the blackened tea. 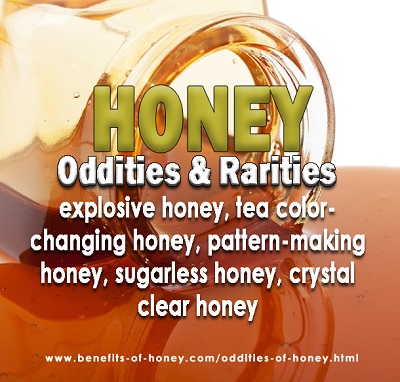 Many have tried to prove the authenticity of honey with this - place a blob of honey on a plate, pour some cold water on the honey, swirl the plate and bingo! You will see hexagonal shapes appear, forming the honeycomb cell pattern! There must be some scientific explanation behind this; however, there is still no way to prove honey purity with this. Many other concentrated forms of syrup may be able to make those amazing patterns too. This test does not rule out the presence of substances such as starch, maltose, corn syrup, added to honey. More in: Hexagonal Honeycomb Pattern

Food manufacturers have responded to consumers who are asking for "sugar-free honey" (next to their sugar-free gums, ice-cream, candies, lozenges, drinks, cakes and pastries) with this jaw-dropping product - "honey flavored syrup" and "imitation honey", which contain 0% honey. I find it hard to blame these food producers in this case; it is an open deception, consumers apparently know what they are getting - fake honey, and seem rather happy with it. Incredible! More in: What is Sugar-Free Honey?

There was once a craze over "wild honey" by a particular merchant in Singapore. The honey was five times more expensive than most honey and aggressively marketed as harvested from the wild forests of Africa, raw and is seven times more superior in health benefits. What made us scratch our heads was, this honey is in a thick malt-like candy form, and when mixed with water, it forms a crystal clear solution. And according to the merchant, this is an indicator of true, authentic honey of great value and blah, blah, blah…. So where has all the bee pollen gone? How can a honey that is void of pollen be a good honey?

"In the heart of the Brazilian jungle, a tiny, remote area exists where the special bees create one of the rarest substances on earth…"

Sometime end of 2016, a viral video on "Sour Honey, the Cancer Cure" created a crazy buzz online with countless asking where they could get sour honey. The video broke through content clutter by condemning "Hilary Clinton's evil Cartel" and claimed how the Cartel and the FDA have tried to push for pharmaceutical drugs and discredit natural cures such as this cancer-curing sour honey. But there was no mention of where to get the sour honey and what exactly was this sour honey. In the end, the mysterious "sour honey" turned out to be a Brazilian propolis product marketed by the Health Sciences Institute. There wasn't any honey after all. It is pathetic that companies had to stoop so low to get business by delivering such a deceptive marketing gimmick. More in: Sour Honey as Cancer Cure?

End of 6 Mind-Boggling Rarities and Oddities of Honey. Back to "The No. 1 Truth About Honey"