Honey is a painkiller? Yes.

And based on scientific studies, honey is as effective as over-the-counter anti-inflammatory, pain-killing drugs in relieving menstrual cramp pain.

Dysmenorrhea, the medical term for painful menstruation, is common among girls and women in the reproductive age. The intensity of cramp pain varies for different individuals. In severe cases of dysmenorrhea, even normal day-to-day activities during the first two days of period can be much affected. Severe pain is more common in young girls and it usually gets better when they are older. Many women experience much milder menstrual cramps after giving birth to their first baby.

Research-Backed Evidence of Honey as a Pain Therapy

According to a research reported by the Archives of Gynecology and Obstetrics (2017), 56 females who suffered from dysmenorrhea were recruited for the aim of comparing the analgesic effects of honey and mefenamic acid, a common pain-killer available over-the-counter known as Ponstel. The women were assigned to two sampling groups; in the first treatment, one group received honey as treatment and the other, Ponstel. In the second treatment, the honey and mefenamic acid administered to the two groups were switched. The severity of pain during the first 3 days of menstruation was studied. 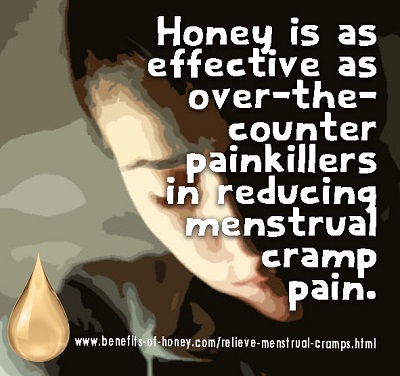 Results revealed that there were no significant differences in terms of pain severity for the two groups in both the two treatments. Honey was found to be as effective as Ponstel as a painkiller but was suggested as a safer choice due to its relatively lower risks of side effects such as nausea, insomnia, stomach-related issues and addiction.

An earlier clinical research results published in the same journal also concluded that one tablespoon of honey taken daily during the two weeks prior to menstruation was just as effective as taking mefenamic acid during period to reduce cramp pain. The women who participated in the study reported feeling just as much cramp relief from the honey as from the pharmaceutical drug.

Honey contains bioactive compounds such as phenolic acids and flavonoids that lower the production of prostaglandins, which are hormone-like chemical messengers that cause contraction of the womb and give feelings of cramp and pain.

Taking honey a couple of weeks prior to menstruation help prevent the buildup of these cramp-causing prostaglandins. Limiting and having a lower buildup of these compounds at the beginning of bleeding means less pain. For instance, gallic acid, one of common phenolic acids found in honey, is particularly abundant in chestnut and heather honey, Malaysian Tualang honey and Australian Eucalyptus. And some of the most abundant flavonoids in honey that have analgesic activities include quercetin, naringenin and luteolin.

If you have been relying on over-the-counter pain-killers to relieve menstrual pain, no harm giving honey a shot to see if it works for you!

1) Honey ginger is an old school concoction known for its effectiveness as a natural pain killer: Honey Ginger Remedy.

End of "10 Stupidest Ways to Make Your Metabolism Sluggish". Go To "6 Great Reasons Why We Need to Exercise".