Hope of a sinus treatment looms...

Sinus is an inflammation of the nasal passages and the air spaces in the bones around the nose and eyes. Every year, over 30 million Americans suffer from sinus and spend millions of dollars for prescription and over-the-counter medications such as amoxicillin and steroid nose spray to find relief from their sinus symptoms.

My husband used to suffer from frequent, sporadic spells of uncontrollable leaky nose and bouts of sneezing fits. It was a sinus condition that plagued him since he was a young boy. In 2008, after about a year of taking a tablespoon of honey before bedtime, the occurrence of these erratic sinus symptoms has gradually become rare. And even when it does strike, it comes in a much milder wave. Could the drastic improvement of be attributed to the daily dosage of honey? My belief tends to lean towards "yes", especially when researchers are turning up more and more evidence of honey's medicinal benefits.

A scientific study has even specifically pointed to the use of honey as an effective sinus treatment. Read the news report below. 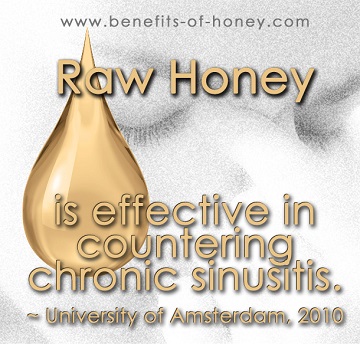 OTTAWA (AFP) — Honey, used in tea or hot water in Canada for generations to soothe sore throats, could soon be substituted for antibiotics in fighting stubborn ear, nose and throat infections, according to a new study.

Ottawa University doctors found in tests that ordinary honey kills bacteria that cause sinus infections, and does it better in most cases than antibiotics.

"It's astonishing," researcher Joseph Marson said of bees' unexplained ability to combine the nectar of flowers into a seemingly potent medicine.

The preliminary tests were conducted in laboratory dishes, not in live patients, but included the "superbug" methicillin-resistant Staphylococcus aureus or MRSA, which is highly resistant to antibiotics.

In upcoming human trials, a "honey rinse" would be used to "flush out the goo from sinus cavities," said Marson in an interview with AFP.

The researchers have so far tested manuka honey from New Zealand, and sidr honey from Yemen.

The two killed all floating bacteria in liquid, and 63-91 percent of biofilms -- microorganisms that sometimes form a protective layer in sinus cavities, urinary tracts, catheters, and heart valves, protecting bacteria from normal drug treatments and often leading to chronic infections.

The most effective antibiotic, rifampin, killed just 18 percent of the biofilm samples in the tests.

"As of today, nobody is sure what in the honey kills the bacteria," Marson said, noting that "not all honeys have the same potency" and calling for more research to determine the mechanism behind the healing.

Canada's clover and buckwheat honey did not work at all. Previous studies have shown honey's healing properties on infected wounds.

The results of the study were presented this week at the annual meeting of the American Academy of Otolaryngology-Head and Neck Surgery, in Chicago.

End of "Research Points to Honey as Sinus Treatment". Back to "Alternative Medicine: What Your Doctors Don't Know".