Did Albert Einstein Ever Link Doom of Human Race to Bees?

Probably, the most common bee controversy ever associated with Albert Einstein is if he had ever predicted this: "If the bee disappears from the surface of the earth, man would have no more than four years to live"?

Perhaps why this dispute created a huge buzz was because it was rather unimaginable for Albert Einstein, who was neither an entomologist nor an expert in beekeeping, to speculate about bees.

Nevertheless, we all would miss the most important lesson in this hoo-ha if our minds are fixed on verifying the authenticity of the quote. The unnerving question is "How true is this statement?" Isn't it? 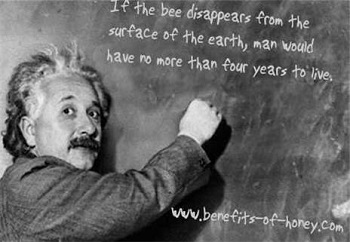 We can brag relentlessly about our knowledge on the advancement of science and technology today, but how much do we really know about the world we live? Have we blatantly and foolishly taken nature for granted?

Sometime in 2006, the sudden, mysterious disappearance of honey bees in the United States, Europe and Brazil was a reminder of the quote attributed to the scientist, and a wake-up call for mankind. Beekeepers lost a bulk of their hives and suffered significant losses in honey production, and up till now are still stumbling over the understanding of this so-called "colony collapse disorder" syndrome and its cause. No one could explain why the bees became disoriented and failed to return to their hives!

We are told that the honey bee is totally responsible for the pollination of over 90 fruit and vegetable crops worldwide, so it would be devastating if we were to lose a majority or all of our honey bee pollinators for these crops which are not self-pollinating and rely on the insects and other pollinators such as birds to help them reproduce. The bee is a fragile part of our system and an important indicator of our out of balance world. Their weird disappearing act has far-reaching implications for our agricultural food supply and is definitely not an issue to be ignored.

Where have all the bees gone? Until now, the cause of this strange phenomenon remains unknown. Some of the possibilities postulated by scientists include:

• Global warming accelerates the growth rates of pathogens such as the mites, viruses and fungi that affect the health of bee colonies. The unusual hot-cold weather fluctuations wreak havoc on bee populations which are accustomed to consistent seasonal weather patterns.

• Increasing use of chemical pesticides and herbicides, which honeybees ingest during their daily pollination rounds have weakened or killed them.

• Increase in atmospheric electromagnetic radiation as a result of growing numbers of cell phones and wireless communication towers. Cell phone radiation interferes with bees' ability to navigate through the air.

Ultimately, whether Albert Einstein did ever discuss about the bees becomes an irrelevant concern in the light of a much graver question, "What should we do to encourage the return of the bees?"

Only two things are infinite, the universe and human stupidity, and I'm not sure about the former.
- Albert Einstein (1879 - 1955)

This book, "Fruitless Fall" written by Rowan Jacobsen, has been recommended by one of our visitors to Benefits of Honey. It looks into why 30 billion honeybees representing one-quarter of the northern hemisphere's population had mysteriously vanished by the spring of 2007. Culprits cited included the blood-sucking mites, pesticide buildup, viral infections, overused antibiotics, urbanization and climate change. The author paints a sad picture of the colony collapse disorder's outcome - what our world will become of as the bee population continues to dwindle.


End of "Did Albert Einstein Ever Link Doom of Human Race to Bees?" Back to "Amazing Honey Bee Facts!"