How intuitive does "honey boosts brain function" come across? Not so, if you have often been told that too much sugar dulls the brain.

Actually, honey has been lauded frequently as the optimum fuel for the brain to prevent metabolic stress and achieve restful sleep, which in turn is critical for our cognitive and memory enhancement. Based on this understanding, we are motivated to further review what literature and research studies have to say about the direct link between eating honey and our ability to think and remember better. And we are thrilled to find very interesting studies that have looked at the neurological effects of honey.

Yes, ancient traditional beliefs that honey has the ability to boost memory, intellect and concentration are now backed by a growing body of scientific evidences. 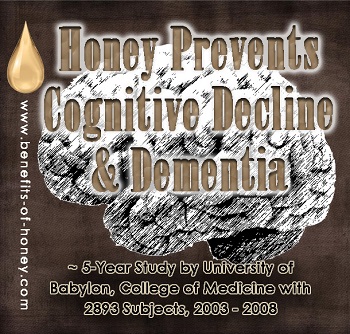 Firstly, a five-year research was conducted from 2003 to 2008 by the University of Babylon, College of Medicine, Iraq to find out the benefits of honey in preventing cognitive decline and dementia. A total of 2893 subjects, all aged 65 and older were randomly selected and studied - 2290 healthy subjects and 603 subjects with some mild cognitive decline but not demented. In the study, about half of the subjects consumed a daily dose of honey, whereas the other half received only placebo. The findings at the end of 2008 were astonishing. Altogether 489 subjects developed dementia; and amongst these, 394 were from the group which took placebo, only 95 were from the group that consumed honey. The result difference in the two groups was statistically significant (P-value <0.05). The researchers of this study concluded that those who ate honey daily were less likely to develop dementia. They believed that honey possessed natural antioxidant and therapeutic properties that were able to prevent cognitive decline and dementia and enhance the brain's cholinergic system and circulation.

Next, studies have shown that the polyphenol properties of honey can counter oxidative stress, restore our cellular antioxidant defense system and hence is helpful in improving memory deficits. (Evidence-Based Complementary and Alternative Medicine, Volume 2014). For instance, an Argentinian study on the chemical composition of honey found that honey helped in building and developing the central nervous system of children and could reduce anxiety, improve memory and learning, and enhance their intellectual performance later in life (Journal of the Argentine Chemical Society, Vol. 96, no. 2, 2008).

As females age, they become vulnerable to the decline of estrogen in their body, which has an adverse cognitive impact on verbal learning and memory. In 2011, a 16-week experiment conducted by Universiti Sains Malaysia found that post-menopausal women who received honey showed improvements in their concentration and immediate memory power. (Menopause: The Journal of The North American Menopause Society, Vol. 18, 2011)

Today, sugar unfortunately has become a nasty word because of the rising consumption of refined sugars such as high fructose corn syrup, one of the worst forms of processed sugar that has been linked to obesity, diabetes, and heart diseases. Honey is often immediately associated with sugar and because sugar is perceived as bad, honey is also seen as bad. However, if we truly understand that sugar is the main energy source for our bodies and a critical source of fuel for our brains, we would surely think twice about choosing which kind of sugar to feed our body and brain.

1) A warning for those who are not sleeping enough: Sleep Disorder Can be Detrimental.