Today, science has acknowledged Manuka honey as medicine. It is probably also by far the most researched and sought after medicinal honey.

Manuka honey, the Maori name for the New Zealand tea tree/bush Leptospermum scoparium or Leptospermum, is the much prized floral variant that is famous for helping to combat infections and heal wounds.

While it originates mainly from New Zealand's north island, the native Manuka plant is known as the jelly bush in Australia. Recently, up to 86 different species of Leptospermum have been identified across Australia. The local universities are now scientifically testing and preliminary research results have shown that these species share the same powerful antimicrobial properties as New Zealand's Manuka honey, possessing the high level of additional non-peroxide, antibacterial components, which are stronger than other hydrogen peroxide types of honey (Queensland Country Life, May 14, 2016) . With the small supply of New Zealand Manuka honey, especially Unique Manuka Factor (UMF) 20 and higher UMF rated Manuka honey and the rapidly rising global demand, the discovery of the Australian source represents a great opportunity for the Australian honey. Australian honey producers are thus beckoned to capitalize on the multi-million dollar market for medicinal honey. 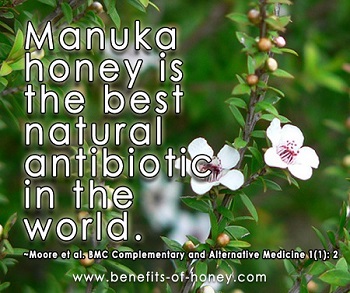 Interestingly, before being discovered by scientists as a medicinal floral varietal in 1981, Manuka honey was classified as a low grade honey due to its intense earthy and herbaceous flavour and dark colour. It was so unappealing to consumers that it was added to cattle feed or discarded. Today, that rejection has been described as 'throwing out the baby with the bathwater'. Foods sometimes are not given enough attention to their value or worth just because they are natural. No wonder Joe Traynor in his book, Honey, The Gourmet Medicine, refers to honey as "a medicine without a profit". It's only after successful marketing and UMF certification that Manuka became so highly sought after.

In 1989, the renowned British publication, Journal of the Royal Society of Medicine asserted,

"The therapeutic potential of uncontaminated, pure honey is grossly underutilized. It is widely available in most communities and although the mechanism of action of several of its properties remains obscure and needs further investigation, the time has now come for conventional medicine to lift the blinds off this 'traditional remedy' and give it its due recognition." (Vol 82, pp. 384-385)

Since this editorial was published, there has been an outpouring of scientific studies addressing the range of honey's therapeutic activities and documenting the medicinal efficacy of honey, especially Manuka honey. These include the hundreds of studies cited in medical journals that prove the effectiveness of honey in treating wounds and preventing infections. Compared with silver sulfadiazine for efficacy as a dressing for burns, honey was also found to enable new skin cover to develop faster, has better relief of pain, less exudation of lymph, and gave a lower incidence of raised scars and contractures. Honey's antibacterial agents were found to be an effective medicine for sore throats, cough, heartburn, acid reflux, fever, cuts, blisters, acne, ulcers, stomach inflammations, keratitis, conjunctivitis and blepharitis, and cataracts.

The index of medical and scientific journals at the National Medical Library in Bethesda, Md., lists hundreds of studies exploring honey's value in treating, controlling or preventing diabetes, Alzheimer's, osteoporosis, stress, sexual problems and scores of other ailments. And more recently, a research by the University of Technology in Sydney in 2013, Manuka honey was found to be more effective than the strongest synthetic antibiotics. The findings were particularly significant as the treatment of chronic wound infections was becoming increasingly difficult due to antibiotic-resistant strains of bacteria such as Staphylococcus aureus and Helicobacter pylori that are a fast growing problem for the medical community. Thus, from a folklore remedy largely dismissed as a controversial "alternative", honey today is increasingly included by scientists and doctors as a mainstream medicine.

1. Why does Manuka honey command a much higher price than other types of honey? Find out in: The Miraculous Manuka Honey.

2. What is the real deal about UMF Manuka honey? My thoughts and take on the subject in UMF Manuka Honey And Its Big Price Tag

4. If you are residing in Singapore, visit e-store Bee Healthy and check out the sale of Manuka honey there. Bulk orders prices available too.

End of "Manuka Honey as Medicine". Back to The Miraculous Manuka Honey.