What is the Benefit of Wheatgrass?

Wheatgrass is a plant grown from the Red Wheatberry that is moving to the top of the nutritional tree. It's an incredible health elixir. Some people call wheatgrass juice "beer before it's beer"; technically, it is young wheat, but non-alcoholic. Commercials describe the benefit of wheatgrass very vividly - "a shot glass of chlorophyll-laden wheat grass juice is like drinking one day's worth of sunshine".

In recent years, wheatgrass juice has become one of the more popular health beverages and can be found at virtually any fresh juice shop and health store in where I live. Sales of wheatgrass products are booming worldwide. However, a glass of chlorophyll is not easy to go down, many people cringe at the thought of consuming one ounce of this "miracle food" because of its raw pungent taste. Nowadays, it's common to find honey, and lemon, being added to wheatgrass juice to make it more palatable. And the latest concoction I found at the shops was wheatgrass juice with apple juice, which really tasted fantastic! 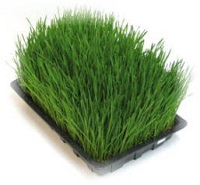 Now, let's look at each of the benefit of wheatgrass and understand why it's so popularly consumed despite its nasty taste.

A Powerhouse of Nutrients and Vitamins: Nourishes and Strengths the Body

In the form of fresh juice, wheatgrass contains 70% of chlorophyll with high concentrations of vitamins A, B, C, D, E, and K, a huge spectrum of minerals such as calcium and magnesium, phosphorus, potassium, sodium, sulfur, cobalt, zinc, and protein, and other nutrients needed for our health and well-being. It properties are important for cardiovascular and immune system function, strengthening heart and arterial tissue, lowering blood fat, and useful in the treatment of degenerative disease and reducing inflammation. Each teaspoon of wheatgrass juice has only about 10-15 calories per and no fat or cholesterol. A benefit of wheatgrass is that it provides a remarkable whop of energy. A 1-oz shot glass of it's juice is equivalent in food-vitamin value to two and a half pounds of leafy green vegetables! On an empty stomach, it is assimilated into the blood in just 20 minutes! Humans can't eat wheatgrass directly as the strong cellulose is too woody and fibrous for the long and complex intestines in humans. Grass-eating animals like cows and horses, goats have short intestines.

Note: Wheatgrass is juiced with a special juicer called a wheatgrass juicer. Regular electric juicers cannot be used as the rapid blade movement causes oxidation of the chlorophyll, undermining the benefit of wheatgrass.

A Natural Detergent and Detox: Removes Build-up of Body Toxics

Our diets consist much cooked, highly processed foods that contain chemical additives, sugar, artificial sweetener, salt and empty calories that can clog our system and cheat our bodies of real nourishment. The chlorophyll in wheatgrass has strong antioxidant properties that can strip out free radicals, neutralize toxins, and allow the body to balance itself and operate at maximum efficiency. It drains the lymphatic system, flush out the toxins from the body cells.

When an injury exists, there is a natural build-up of mucous in the lymph particular to that area. This mucous is encapsulated, helping to ensure the proper flow of lymphatic fluid. Wheatgrass juice helps breakdown the mucous and allow it to drain, relieving pressure to allow healing. Wheatgrass juice is helpful in dissolving scars that are formed in the lungs from breathing acid gasses such as carbon monoxide, and removing toxic metals stored in the body, e.g lead, cadmium, mercury, aluminium. Its chlorophyll has the ability to break down poisonous gases and release free oxygen.

One big benefit of wheatgrass is that it's a complete protein with about 30 enzymes. Enzymes are important for every bodily function – breathing, thinking, vision, digestion, etc, are responsible for the growth and reproduction of body cells, and have been linked to the prevention and curing of cancer cells. Young people have a natural inheritance of enzyme concentration in the cells and friendly bacteria in the gastro-intestinal tract. As we get older the high demand for enzymes due to cooked foods, pathogenic microbes and chemicals, leads to more and more exhaustion of enzymes. For instance, a 70 year old has only about half the enzymes of the 20 year old. The pancreas, which produces our digestive enzymes, also becomes less efficient as we age due to the depletion of enzyme. This results in indigestion, reduced absorption of nutrients from food, and nutritional deficiency. And in many cases, this malfunction leads to weight gain. That's why obese people are usually malnourished. Wheatgrass can provide the additional enzyme intake that is required for overall good health.

Finally, another benefit of wheatgrass juice is that the chlorophyll molecule in wheatgrass is structurally very similar to the iron carrying component of haemoglobin in red blood cells. It's juice has shown to build red blood cells quickly after ingestion. It normalizes high blood pressure and stimulates healthy tissue-cell growth. The blood cleansing and building abilities of chlorophyll, its effect on the circulatory system and oxygen supply, and its role in detoxifying and regenerating the liver. It also has an alkalizing effect on the blood and has been used to treat ulcers, constipation, diarrhoea, and other complaints of the gastrointestinal tract. A glass of fresh wheatgrass juice on an empty stomach is also known to be an effective hangover cure.

A Word of Caution:

As wheatgrass is consumed raw, there is a concern about contamination when it's not grown organically. Consumers especially women who are pregnant or breastfeeding, have to ensure that it's produced in soils or water that is free of heavy metals, pesticides, bacteria, moulds, or other substances. Such guarantee may not appear on the label and should be requested from the manufacturer.

"An ounce of prevention is worth a pound of cure." ~ Ben Franklin


End of "Miraculous Benefit of Wheatgrass Redeems Its Nasty Taste". Back to "Health Food Matters"