Why does the Honeybee Dance? (6 Awesome Facts You Never Knew)

Did you know how powerful the honeybee dance is? Watch the short video clips below.

Karl Ritter von Frisch won a Nobel prize for cracking the honeybees' communication code in 1973. It was discovered that these little insects have an awesome sense of time, distance and direction. Newer studies have also suggested that honeybees measure distances by the amount of optical information encountered during a flight (The Journal of Experimental Biology 199, 155-162, 1996). But their miraculous ability to communicate information about flower sources and calculate distances can only be fully explained by their Creator.

1. When Nectar Source is Discovered

Upon discovering a food source, the honeybee returns to its hive to report on the nectar’s quality and location by dancing.

It shakes its body and dances in the direction of the nectar source with reference to the sun’s position.

3. Make Use of Sun's Position and Movement

It even takes into the account that the sun movement when describing to the rest of the bees the flower location.

Its dance duration & no. of vibrations tell the exact distance to the flowers. It stores just enough honey for the journey.

The bee quickly works out the shortest route to feed from a network of flower sources to minimize flying time.

Studies show that the bee, with its sesame seed-sized brain, calculates the most efficient route speedier than computers. 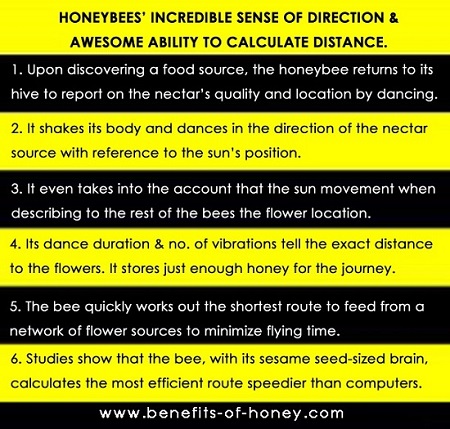 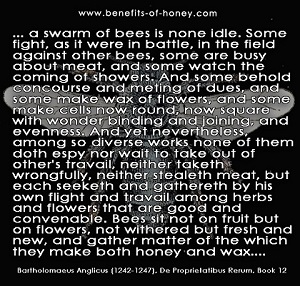 End of "Why does the Honeybee Dance? (6 Awesome Facts You Never Knew)". Back to Honey Bee Facts that You Probably Never Knew.