7 Things to Know About Anti-Cancer Propolis (#4 is Impressive)

1. Bees' Own Defence Against Diseases and Infection

Propolis is a natural antibiotic made by honeybees that is fast gaining in popularity in the application of home remedies! It's a bee product that makes head turn and cause us to wow at the wonder of nature and marvel at the ability of the highly organised insect - honey bee. Did you know that the bees use it to protect themselves from diseases?

Some trees and conifers produce sticky resins as part of their immune system to defend themselves against disease. Honey bees collect these substances that ooze from the buds of these plants. (Research found out that honeybees make discrete choices among resinous plant species (PLOS ONE Journal, Oct 2013). After chewing them and mixing them with their saliva and other substances, propolis is formed. 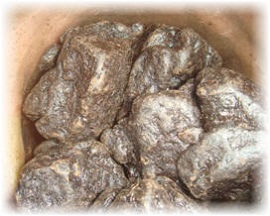 This nutrient-rich substance is of vital importance for the survival of the honey bees in the beehive. It is created to sterilize the hive and protect it against diseases and infection. Interestingly, "propolis" means "in defence of the city" in Greek. Not only does it help to inhibit the spread of bacteria, virus, and fungi that would otherwise pose a significant threat in the closely-knit quarters, it also helps fight against climatic changes, such as wind and cold. 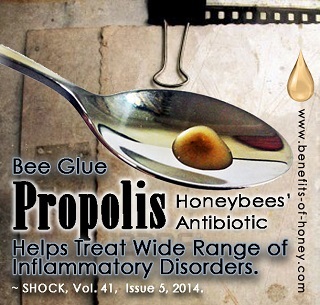 Propolis contains approximately 50-70% resins, 30% wax, 10% etheric oils and 5% pollen. It is especially rich in amino acids which are vital for healthy immune system function. It has a high vitamin content (Vitamin A (carotene), Vitamin B1, B2, B3, biotin) and is extremely rich in bioflavonoids (Vitamin P) which are natural pigments in fruits and vegetables believed to have numerous immune building properties and health benefits. Bee glue contains almost 500 times more bioflavonoids than is found in oranges! It also contains an array of albumin, calcium, magnesium, potassium and phosphorus. Like Royal Jelly and Bee Pollen, it contains a number of unidentified compounds which work together synergistically to create a balanced, nutritive substance.

Propolis can be purchased completely raw and unprocessed, but it in its natural state is a sticky substance and is very difficult to handle. Some beekeepers will package it raw and freeze it in small portions. It can then be added to a coffee grinder in its frozen state and ground for easy consumption. Most producers utilize a process where the active ingredients are ‘leached' into water or alcohol, then either packaged in liquid form or dried and capsulated.

Because of its antibacterial, antifungal, antiviral, anti-inflammatory and antioxidant effects, this precious substance has been used as a natural cure and healing agent for many centuries. It has the ability to provide protection against infectious invaders, promote healing and regeneration of tissue, and provides a superior source of energy and stamina. Touted as an outstanding ointment for healing cuts and wounds and treatment for tonsillitis, mouth ulcers and intestinal infections, propolis contains an active component, Caffeic Acid Phenethyl Ester known to be effective in treating many other inflammatory disorders that lead to cell damage/death. 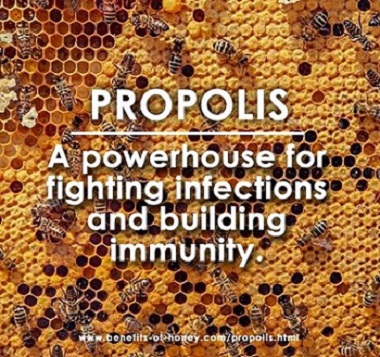 Propolis is also used as a natural alternative to penicillin and other antibiotics. It is said to be particularly safe and effective and inhibits the resistance-building effect that is a negative factor with prescription antibiotics. In fact, in the former Eastern Bloc countries, where beekeeping is widely practised, antibiotics have never been widely available. To help prevent many diseases, hospitals and clinics in these countries recommended washing, gargling or irrigating the sinuses with this natural antibiotic rinse, as well as taking it orally. A good weapon against bacteria when used topically, propolis can prevent skin infections, acne, burns, insect bites and can help heal infections that have already begun. According to a research published by Phytotherapy Research Journal, in 2010, scientists at Strathclyde University, Scotland tested compounds extracted from bee glue on 15 different strains of the virulent superbug MRSA (Methicillin-resistant Staphylococcus aureus, a bacterium responsible for tens of thousands of infections and deaths annually) and found that it appeared to work against more than 50% of the strains and prevent them from growing. The study was the university's response to the pressing need to discover and develop new antibiotics from natural sources as alternatives to current anti-MRSA drugs. Propolis was investigated because bees use it as an antiseptic glue to seal gaps between honeycombs and preserve their hives from microbial contamination.

Note of Caution: Propolis is generally non-toxic, though allergic reactions such as skin rashes, swelling, redness, eczema or fever have been reported. As the effects of this bee substance during pregnancy and breast-feeding have not been sufficiently evaluated, women should not use it during these times unless directed to do so by a physician.

"Monoamine oxidase (MAO) inhibitors are generally used in the treatment of depressive disorders and some neurodegenerative illnesses... study was to investigate the MAO inhibiting effect of various apitherapeutic products, such as chestnut honey, pollen and propolis... All samples exhibited substantial inhibition of MAO, propolis having the highest."
Journal of Enzyme Inhibition and Medicinal Chemistry, October 2014, Vol. 29, No. 5

If you do a search and scan across different websites selling propolis products, you'll be told that this bee product doesn't taste bad as you think -- it's "fragrant", "pleasant", "non-bitter", "yummy", "fun to chew", etc. However, note that in products such as toothpaste, honey, candies, gums, drinks, etc, propolis is only one of the many ingredients used. It'll definitely taste different because of other contents which come in relatively bigger proportion.

The truth is, raw propolis-extract is horrible-tasting. It is bitter and sour, and not the most pleasant-smelling thing on earth. 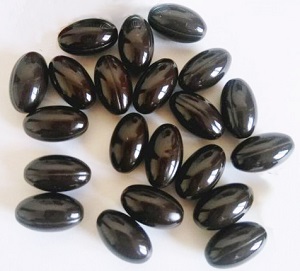 The best way to ingest propolis is in the capsule form which can be just swallowed directly like any supplements, or get the liquid form.

Water-based propolis extract is also available in small bottles that usually come with a dropper. Daily, squeeze a few drops into a glass of water, mix and drink it to cleanse and detoxify your body, and strengthen your immune system.

If you are located in Singapore, you can check it out at Bee Healthy! 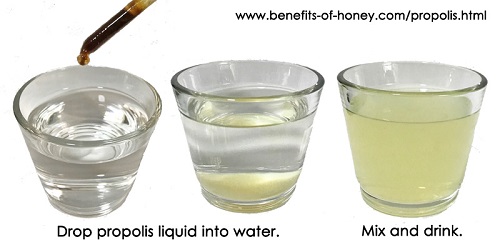 2. For propolis products such as propolis capsules and candies, check out Bee Healthy.

End of "7 Things to Know About Anti-Cancer Propolis (#4 is Impressive)". Back to "Common Terms of the Honey Bees World"