Royal Jelly is not a product collected by the honey bees from flowers. It is a creamy white or pale yellowish substance specially created by worker bees (also referred to as nurses), which mix honey and bee pollen with enzymes in the glands of their throats to produce the extraordinary food.

Royal Food for the Queen

All bee larvae are fed royal jelly mouth to mouth by the nurse worker bee for the first three or four days after hatching. The first queen to emerge after the mother queen departs with the swarm will destroy the others. If two or more queen candidates emerge at the same time, they fight to the death just to rule.

The queen eats nothing but this royal perfect food throughout her adult life, and can live eight to 10 times as long as the lowly worker bee, which typically has a lifespan of only about 2-3 months. It can take up to 1,000 larvae to produce a single pound of royal jelly. After extraction, this rare fluid is immediately refrigerated or freeze-dried to prevent spoilage.

Royal Jelly, also often called "milk of bees" by many people, cannot be duplicated in any laboratory due to its complex chemical structure and is an expensive item on the shelf, but it seems to have become increasingly more and more popular as a beauty bee product. 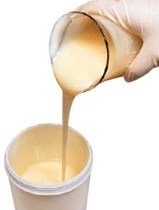 Precious and rare, and treasured as a beauty secret of royalty, this special "jelly" is believed to be able to nourish the body on the inside and revitalizes it on the outside as well. More and more girls are beginning to talk about what this stuff is as its benefits are extensively associated with healthier skin and hair and more youthful appearance. It is not only used in dietary supplements, but also as additions to skin lotions, creams and cosmetics. Rich in estradiol, a major estrogen functioning as the primary female sex hormone, this natural substance is commonly known to be effective in treating women who have problems with their menstruation such as abnormal cycle, pain, discomfort, and fatigue.

Some people drink "Royal Jelly Honey", an unusual, chilled, sour-tasted drink which is basically honey water mixed with the "bee jelly" to relieve "heatiness" in their body. Besides mineral, amino acid, and vitamins, this special jelly contains 10-hydroxy decenoic acid which gives the sour taste and can inhibit bacterial growth. As the "milk of bees" is ultra sour, has a bitter taste and a strong odour, it is normally sold in capsule form for easy and convenient consumption.

Hailed as "one of nature's best kept secrets" by Royden Brown, author of the Bee Hive Product Bible (Avery, 1993), this royal food contains an extraordinarily high concentration of vitamins B5, B6, and amino acids and is believed to be a potent antioxidant and a special rejuvenating substance that promotes tissue growth, muscle and cell regeneration. It is taken as a health and energy tonic and natural remedy for a host of ailments such as:

5) Research shows that royal jelly can alleviate menopausal symptoms such as hot flashes and irritability, and improve feelings of well-being in menopausal women.

9) The natural insulin-like property of Royal jelly has also been studied as a treatment for diabetes. Research findings published in the Chinese Journal of Integrative Medicine (March, 2014) indicate the ability of royal jelly to help maintain blood sugar levels while controlling oxidative stress, suggesting that it may be a natural alternatives for preventing and even reversing Type 2 diabetes. From the 8-week study involving 50 women with type 2 diabetes, half receiving 1,000 mg of royal jelly and half receiving a placebo, the researchers concluded:

Note of Caution: There are concerns of side effects related to asthma in the consumption of royal jelly, but cases are extremely rare. It is safe for the majority of people to take. Some brands are required by their country regulations to include such warnings on certain food allergies. Also, I notice some suppliers have included a clause in their product to warn breast cancer patients against consuming it due to the interactive effects of estrogen.

End of "9 Amazing Healing Benefits of Royal Jelly". Back to "Common Terms in the Honey Bees World".