Stingless Bees are an Eye Opener

Did you know that there are stingless bees?

I finally met Diniy when I visited him in Selangor. Diniy is a young beekeeper whom I befriended online some time back. Among his many interesting hobbies is beekeeping and what is so special about his bees is they are all stingless! According to Diniy, his bees belong to the rare species of Trigona Itama, one of the many stingless bee types. They are known as Kelulut in Malaysia and "sugar bag" in Australia by the aboriginals.

The swarm of little black winged creatures floating next to the little, propolis-made entrance of Diniy's unusual looking, half natural, half man-made hive at his home balcony was an especially pretty and mesmerizing sight. The honeybees that I have known so far seem to love zipping and buzzing around with a great sense of urgency to accomplish their work, but there wasn't the same hustle and bustle with those stingless bees which seemed to be a lot more relaxed, and somehow they wouldn't make you feel as tense with their lack of ability to sting. Diniy explained that even though they did not possess any sting, they were capable of biting and could become very aggressive when protecting their hives. They could also defend themeselves by trapping ants, intruders in their hives and humans with their sticky propolis or "bee glue" collected from plant resin. They live in hollow trees and rocks and make use of resin to build tube-like entrances to their nests. As their colonies rely entirely on flower nectar and pollen for food, they are important pollinators of many forests and plants. 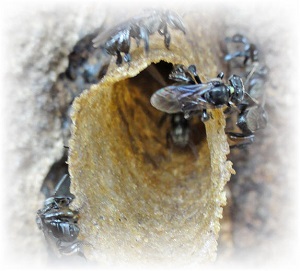 The all-black appearance of the bees came as my first surprise - they were much smaller, about 3 to 5mm in size, and had a slimmer body that was totally different from the usual yellow and black honeybees I knew. And if you are expecting frames of hexagonal cells in the hives like me, the 3-minute video and pictures below are going to knock you off the chair. There was no sign of the familiar honeycomb, but only a mishmash of a highly irregular, black and brown structure covered with propolis. Small honey-filled pods were planted haphazardly on the structure, surrounded by returning bees loaded with pollen and propolis on their legs. A spectacular sight that was! And can you guess the taste of the honey and bee bread? (Drum beating....) Hey, surprisingly, it is sour, perhaps the most sour honey I have ever tasted. It tastes very pleasant though and when mixed with water, it's like honey lemon drink!

Diniy learns how to keep bees from his mentor and has attended a course on the benefits of the sting-less bee honey and its nutritional value conducted by University of Science of Malaysia (Universiti Sains Malaysia) in Kelantan and is working on testing and certifying his stingless honeybees' honey, bee bread and propolis. He believes that the stingless honeybees make honey that is highly antimicrobial and has an even stronger medicinal value compared to New Zealand's Manuka honey. As these bees are not able to produce as much honey as the western honeybees (Apis mellifera) and their honey has to be extracted from the individual pods of the hive one at a time, harvesting their honey can be extremely costly.

Thanks Diniy, thank you for showing me these amazing stingless bees!


End of "Stingless Bees are an Eye Opener". Back to Keeping Bees in Singapore.