Busy as a bee

How true is the idiom - "busy as a bee"? We often compare busy people to the honeybees, Apis mellifera. Are bees really so busy? Take a peek into what these tiny creatures are doing every day.

The worker bees, which are all females, are the hardest working. They are tasked with the foraging of nectar and pollen, spending most of daylight outside the hive. Entomologists have reported that these bees make more than 100 foraging trips in a day. When the sun goes down, they head back to the nest.

In 2014, Researchers from the University of Illinois studied the foraging activities of honeybees by tagging 100 to 300 workers from five colonies with tiny micro-transponders and found out that some bees were much busier than the rest. According to the researchers, these "elite" foragers "began to make trips as soon as the colony became active each morning, and made regular, closely spaced trips throughout the day until the cessation of colony-wide flight activity in the evening." (Source: Animal Behaviour (2014) 41-48) 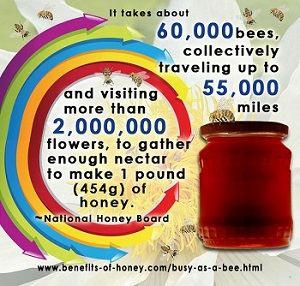 As bees do not have eyelids, they do not sleep the way we do; they simply stop moving and rest. During winter, when it gets too cold outside, the bees all clump together towards the middle of the hive, surrounding the queen, and keep themselves warm by vibrating their abdomens and vigorously buzzing their wings. This can heat their bodies up to about 110 degrees Fahrenheit (44° C), which is about 48 degrees Fahrenheit (9° C) warmer than their normal body temperature. (Data source: The Telegraph, Honey Bees Secret World of Heat Revealed.)

Other worker bees are kept busy around the clock with jobs within the hive including feeding the queen and larvae, building and repairing the hive, fanning her wings to keep the nest cool, and protecting the hive against enemies. The queen is also busy, laying more than 1,000 eggs each day. Drones, the male bees, have it the easiest. If fertilization is considered a kind of work, then that is the only work they do. They leave their hive for only two to three hours a day and rely on the worker bees for food.

The next time you purchase or open a jar of honey, remember the long, grueling days of the industrious honeybees and how much time and hard work has gone into making the golden liquid - In the average worker bee's brief lifetime of four to five weeks, she will make just one-twelfth of a teaspoon of honey. It takes about 60,000 bees, collectively traveling up to 55,000 miles and visiting more than 2 million flowers, to gather enough nectar to make just one pound of honey (Source: The National Honey Board). Thank you, honeybees!

How Doth the Little Busy Bee by Isaac Watts

How doth the little busy bee
Improve each shining hour,
And gather honey all the day
From every opening flower!

How skillfully she builds her cell!
How neat she spreads the wax!
And labors hard to store it well
With the sweet food she makes.

In works of labor or of skill,
I would be busy too;
For Satan finds some mischief still
For idle hands to do.

In books, or work, or healthful play,
Let my first years be passed,
That I may give for every day
Some good account at last. 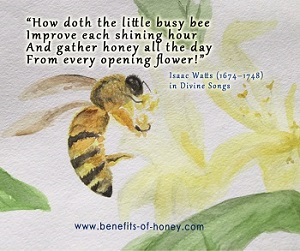 3. How honey bees organize themselves and assume the different roles in the hive: Awesome Roles of Bees in a Hive.

End of "Busy as a bee". Back to "Honey Bee Facts that You Probably Never Knew".