Honeybees are a highly fascinating, remarkably organized society. Typically, they live in colonies which consist of a queen, hundreds of drones and 20,000 to 80,000 female worker bees. A bee colony is known as a super-organism as no single bee can survive on its own. There is division of labor and every member must carry out their own bee roles and duties, and co-operate with one another for survival. The following lists the different roles of bees in a hive.

The queen is the only fertile female in the colony. It is the only member that is able to lay fertilized eggs. The queen bee continually emits pheromones, a bee perfume that only the bees in the hive can smell. These pheromones keep the female workers sterile and also act as a signal to assure all the bees in the colony that the queen is alive and all is well in the hive. It is believed that this unique scent provides the colony a sense of identity and personality. The queen mates early in life, stores up millions of sperm within her body, and fertilizes her eggs as and when needed. She is capable of producing up to 2,000 eggs within a single day. To produce drones, she lays unfertilized eggs. A queen bee lives for 3- 5 years. However, when it falters in her egg-laying performance, the hive will start looking for a replacement and feed royal jelly to a developing larva.

Worker bees constitute the largest population in the colony and are all females. They are unable to produce fertilized eggs, however if there is no queen, they sometimes lay unfertilized eggs, which become male drones. Each worker bee, guided by a biological clock, assumes different responsibilities and performs specific job duties as she reaches a certain age.

Bees are probably one of the most feared and misunderstood insects. A worker bee typically stings only if threatened or aggravated in some way. When it stings to protect itself or the hive, its barbed stinger lodges in the skin, along with its digestive tract and muscles. As it pulls away, it suffers from an abdominal rupture and dies. So, remember, the honeybees are not out seeking to sting people. Don't swat them away aggressively, stay calm and gently brush them off. This way, you don't get hurt, they don't die.

When they are about fourteen days old, the worker bees leave the nest at sunrise as foragers and visit the flowers four to five-kilometer radius from the hive in search of nectar, water, pollen and propolis. They can make about ten trips a day, each one lasting about an hour and return to their hive at sunset. This is perhaps the most dangerous job of all the different roles of bees. At this final phase of life, at the age of 6 - 8 weeks, most worker bees will die in the field. During the winter, bees stop flying, hibernate in their hives and live on stored honey from fall to the next spring.

Worker bees become cleaners of brood cells when they are only one or two days old. They are responsible for cleaning and polishing the empty cells that are ready to receive new eggs and store nectar and pollen. The queen inspects the cells and if they are not clean, the cleaners will have to do it again. 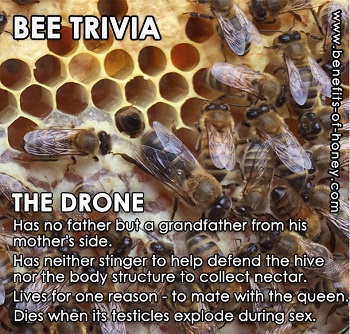 A drone is hatched from an unfertilized egg. This process is also called arrhenotokous parthenogenesis. Thus a drone has only one parent and a single set of genes, that means he has only one set of chromosomes from the mother. So, paradoxically, a drone has no father but a grandfather from his mother's side! Drones have neither stingers to help defend the hive nor the necessary body structure for collecting pollen or nectar to contribute and feed the community. They live for one sole reason - to mate with the queen bee. (Read account in: The Dramatic Sexual Suicide.) When there is a lack of food during the winter season, they can be prevented from entering the hives by the worker bees and as a result, die of starvation.

When the worker bees are a little older, they become in charge of removing dead bees and disposal of the corpses to a place as far from the hive as possible. Diseased or dead broods are also quickly removed by the undertakers before becoming a health threat to the colony. 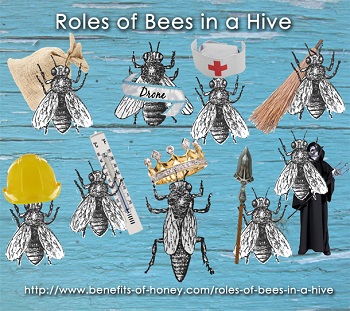 Brood care bees' roles in the hive involve incubating and caring for the developing larvae. It is said that on average, nurse bees check a single larva over a thousand times a day. Worker bees also take nectar and pollen and deposit into the cells as food for the colony. They feed pure royal jelly, a milky concentration secreted from the food glands in their heads, to the queen larva, and a mixture of pollen, honey and jelly to the worker and drone larvae. According to a study by Martin Luther University Halle-Wittenberg in Halle, Germany, when a hive is infected with a parasite, the nurse bees selectively eat honey that has a high antibiotic activity and distribute it to other members of the colony. As the hive's medical specialists, they prescribe different types of honey as medicine to other bees depending on their infection (BBC Earth, Oct 2014).

Worker bees that are about 12 days old are mature enough to begin secreting and producing beeswax , the material for the construction of comb. The wax flakes they produce help with the building of new wax comb and in the capping of ripened honey and cells containing developing pupae. The bee must consume large amounts of food (honey and nectar) to produce these wax flakes. In 1999, Thomas Hales produced a 19-page mathematical proof that of all the possible structures such as rectangles, squares or triangles, honeycombs use the least amount of wax and are the most efficient and practical structures in nature . As Charles Darwin put it, the honeycomb is a masterpiece of engineering and is "absolutely perfect in economizing labor and wax." 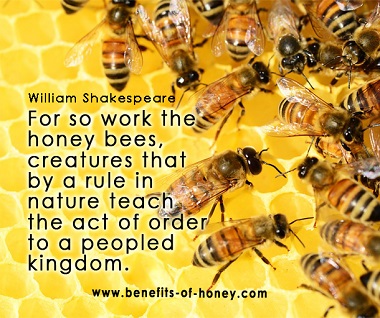 Guarding the hive is the last task of a worker bee before venturing out to the fields. The guards inspect every bee that returns to the hive for a familiar scent. Only members of the hive are allowed to enter. Bees from other hives are occasionally allowed in when they bribe the guards with nectar. These "foreigners" steal some honey and pollen and leave. The guard bee also looks out for any crack through which a robber bee or intruder might enter the hive. These worker bees also defend their colony against other insects. When their stingers are used to attack the intruders, they tear their abdomen and die as a result. They also emit an alarm pheromone from a gland near their stingers to alert other bees on any impending danger.

1. Learn what amazing things the honeybees can do in: Fascinating Honeybee Facts.

2. Find out why Beekeeper Geoff Kipps-Bolton from San Diego says "no matter how many books you read..., the bees will retain the right to do something different...They have an infinite capacity to make you look foolish...they don't read the same books! Read full account in An Up-Close Look at the Bees with Geoff the Beekeeper.

3. Read about Pam's new found passion - "The more we read about these amazing insects, the more respect I gained for them. I go out to our hives just to watch them come in from foraging and watch the others take flight to get the nectar and pollen." Read full account in Insights into Beekeeping: An Interview with a Beekeeper.

4. More honey bee facts that will wow you, in: "About Honey Bee - Facts that You Probably Never Knew"

5. Do you know that Honeybees are Ultimate Bomb Detectors!

6. Find out how Marion got into beekeeping after learning about the Colony Collapse Disorder. All in: Marion's Bee Keeping Journey

7. Ever heard of the stingless bees? All in: Stingless Bees are an Eye Opener

End of "10 Awesome Roles of Bees in a Hive (#2 and #5 are Surprising!". Back to "About Honey Bee - Facts that You Probably Never Knew"