This e-news is dedicated to bringing Benefits of Honey visitors interesting news related to honey, food, health and nutrition issues, which I think are really worth a read.

August, 2019, Yet Another Impressive Wound-Healing Work of Bees That Forage on Manuka

Manuka honey has made news again!

Its potent anti-inflammatory and healing-promoting properties have been proven scientifically to work effectively in wound treatment. 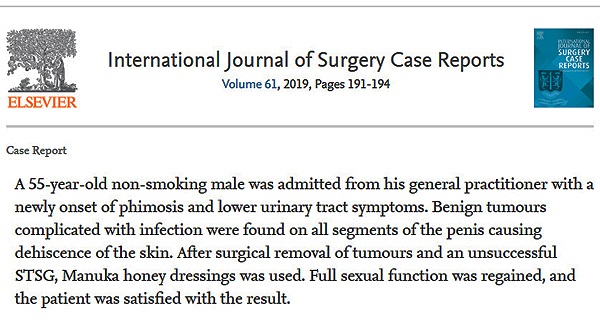 Manuka honey can indeed be a non-invasive and superior alternative to conventional surgery for wounds, ulcers, and burns which can be difficult, time consuming, and expensive to treat.

June, 2019, When There are No More Insects for Agriculture Pollination... 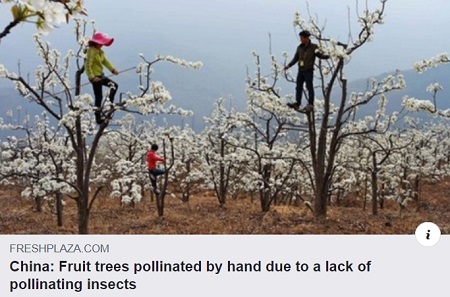 When agriculture's default pollinator is dying in record numbers, humans have no choice but to take over; we become the pollinator instead.

Incredible but true, in China, the excessive use of pesticides is destroying the natural habitat of pollinating insects such as the honyebees and the drastic reductions in their populations have forced fruit producers to resort to mechanical pollination - pollinating their fruit trees by hand. In other words, humans are now doing bees' work and are manually transferring pollen from the stamen of one plant to the pistil of another.

"Normally, people would use a paintbrush and a little jar or pot, so you basically go from flower to flower, brushing the pollen into your pot, which is very slow work. And then you go around brushing the pollen onto other flowers, trying to get it onto what's called the stigma - the female part of the flower. And if you've done that correctly, then hopefully your flower will turn into a fruit."

This is such an irony. Intensive commercial farming leaves too little food for the bees and the pesticides used are exposing them to a lot of harm. Bees, as a result are often infected with parasites such as varroa mites which they don't have any resistance to. The Colony Collapse Disorder, a phenomenon whereby bees are disappearing by the millions, is not only happening in China, but also the United States and Europe.

Honeybees are born to work. They don't go to school and get a job assigned after graduation. They rely on their genetics to direct and enable them what to do and when to do it. Born into a cleaning job, they then continually change duties accordingly to what their hormones and genes trigger them to instinctively tackle at different phases of their lives.

After spending the first few weeks of their adult life performing tasks inside the hive, the honeybees will be activated by their hormones to carry out their final phase of work - foraging, the most dangerous and most important job, and they will then compulsively work until they die, typically within 1 to 2 weeks.

March, 2019, Bee Creative and Save the Elephants

In India, many elephants die every year after colliding with fast trains on the railway tracks. The Northeast Division of Indian Railways in Guwahati has implemented a novel way of keeping the elephants off the railway tracks -- by playing the buzzing sound of honey bees.

Basically, a simple device is used to amplify the recorded sound of honeybees that is downloaded from the Internet. Despite their thick skin and size, elephants dread bees and are particularly fearful of being stung on their sensitive trunks. The recorded honeybee buzz is audible to elephants 600 metres away and since they are terrified by the buzzing sound, they will change their path and stay away from the railway tracks.

This initiative has brought down the number of train-elephant accidents and proven to be more effective and cost efficient than other better-known methods, such as the as the chili bomb (a mixture of crushed chiilies and elephant dung) and electric fences.

Wallace’s giant bee (Megachile pluto), the world’s largest bee, after going missing for 38 years, has been rediscovered on the Indonesian islands of the North Moluccas by a search team of North American and Australian biologists.

Four times larger than a honeybee, the giant bee was first discovered in 1858 on the tropical Indonesian island of Bacan by British explorer and naturalist Alfred Russel Wallace, who described the female bee as “a large, black wasp-like insect, with immense jaws like a stag beetle”.

Very little is known about the elusive bee, whose habitat is gravely threatened by the massive deforestation that is going on in Indonesia.