Here are some of the most awesome facts about our planet's most fascinating, sophisticated insects - honey bees. They will keep you buzzing!

Honey bees are able to quickly work out the shortest route from the floral nectar source to save flying time and store just enough honey for the journey. Scientists found out that they are even speedier than computers in calculating distance. More in: Why does the Honeybee Dance? (6 Awesome Facts You Never Knew)

2. The Architectural Wonders of Honeycombs

Today indoor structures, furniture, and household and office products, and even airplane wings and satellites walls are built upon the hexagonal structure principle, but do you know which scientist first discovered this structure to be the sturdiest? The bees! They know that no other shape could weave and create more space and more strength for their wax cell walls and for their combs to store their honey. More details in: Hexagonal Honeycomb Pattern. 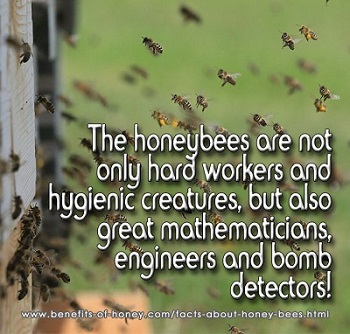 The average worker bee produces only about 1/12th teaspoon of honey ((which is about 5g of honey) in her lifetime. To make a pound of honey, honey bees need to visit 2,000,000 flowers. More fascinating facts in: Fascinating Honeybee Facts.

Honey bees have phenomenal smell recognition for finding floral nectar sources and differentiating different floral varieties. They have 170 odorant receptors, compared with only 62 in fruit flies and 79 in mosquitoes. Scientists have harnessed this ability to detect explosives hidden by terrorists. The bees are found to be able to "detect the scent of explosives at concentrations as low as two parts per trillion, which is the equivalent of finding a grain of sand in a swimming pool". More details in: Honeybees are Ultimate Bomb Detectors!

Honey is the only food by an insect eaten by man. But do bees poop in the honey they make? The honey bees do not build their bathrooms inside their combs. They are smart enough not to risk contaminating their food supply and infecting their developing their offspring. In fact bees even produce an antibiotic substance from sticky plant resins known as propolis to sterilize their hive and protect it against diseases and infection and inhibit the spread of bacteria, virus, and fungi. More details in: Do Bees Poop in Their Honey?

I'm not sure of the drones know the fatality of mating or if they actually take time to consider if they should take the mating flight, but yes, tragically, drones die during sex. The drone's testicles explode during its climax and it dies. The snapped-off penis acts as a plug inside the queen bee to prevent other drones from fertilizing the queen. More details in: 5 Honey Bee Facts that You Probably Never Knew (#4 is Shocking).

Some people say it's gross to eat honey because honey is bee's vomit. But this is an erroneous thinking. The bee collects and stores the nectar from flowers in the "honey stomach" and digests the nectar in another separate stomach. Unlike humans, it has two stomachs! More details in: Is Honey Bee Vomit?

8. Bees are Too Busy to Sleep?

Honey bees spend most of the time outside their hives collecting nectar and pollen in the day, making more than 100 foraging trips in a day. They head back to their hives to rest when the sun sets. They do not have eyelids, so they do not sleep the way we understand sleep. So, yes, bees are busy but they do sleep; they simply cease all activities and stop moving. More in: Busy as a bee.

1. Be amazed by how honey bees organize themselves and assume the different roles in the hive: Awesome Roles of Bees in a Hive.

End of "8 Most Awesome, Shocking Facts About Honey Bees". Back to "Awesome Roles of Bees in a Hive"